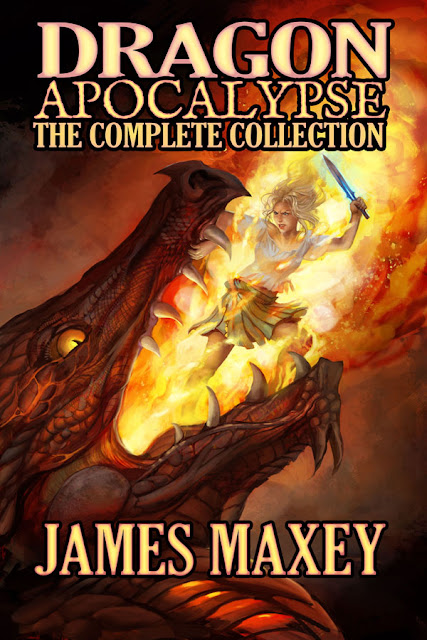 Behold! The Dragon Apocalypse has arrived! After a few technological obstacles, I've finally got the book live at most major book buying websites.

The Dragon Apocalypse is literally a labor of love. When I finished my Bitterwood saga a few years ago, I wanted to write something completely different in tone. Bitterwood was so dark and, well, bitter. I wanted to write about characters who were having a little fun with their lives, who actually enjoyed the grand adventures they undertook. I wanted the book to be funny, though not a parody. I also knew I wanted to write a love story, where I could explore a more redemptive and optimistic force than the revenge and hatred that had run through the struggles in Bitterwood. I also wanted to try something stylistically daring, writing the first two books in a first person voice with a single POV narrator who could give the tale a bit more attitude and edginess than I could allow myself in a third person voice. And when that narrator, Stagger, was taken off the playing field by events in the second book of the series, I switched back to third because I needed an objective voice to bring you Sorrow, the witch who drives the events in the last two books, and a character that I consider to be one of my best creations. She's both serious and funny, cruel and kind, introspective yet utterly blind to many of her own faults. She's ruthless in her goals, but also noble, and willing to sacrifice her body and sanity to serve the greater good.

One other thing other thing I'd like to note about the novel. Many, many years ago, before I'd written a single word of this series, I pitched the overall idea to my publisher. The key to any good pitch is to get to the heart of the matter in as few words as possible, so I used just four: "Bad girls, big dragons." I actually forgot about that pitch while I was writing, but when I look at the final battle, it strikes me that nearly all the major players in the effort to save the world from the dragons are women. Infidel, Cinder, Sorrow, the Black Swan, and Gale Romer are calling the shots and fighting on the front lines. One of their major goals is rescuing a male protagonist who's been captured. There's not a damsel in distress to be found. But there's nothing artificial about the all-girl cast at the end of the series. They were simply the best, most competent characters to arise from the pages of the plot.

This book has everything. It's a love story, a comedy, a ghost story, a philosophical debate, and an epic adventure that spans twenty years and literally takes the characters to Hell and back. What more could you possibly want in a book?

First, Amazon. On this page you can buy either the ebook or the print edition.

Next up, Barnes and Noble. Only the ebook is showing at the moment, but the print edition should link in any day now, and you can also walk into any book store of your choice and have them order a copy of the print edition.

Apple, Kobo, and Smashwords will round out the ebook venues. Between one of these vendors, the ebook should be available worldwide. I know that Amazon UK has the book live because I'm already making sales there. The print edition is going to be available in the US, the UK, and the rest of Europe via Createspace. Alas, no distribution in print to the rest of the world at the moment. If you are outside North America and Europe and need to get your hands on a print copy, drop me an email and I'll see what I can work out if you're willing to pay for international shipping.

That's it! Thanks for your attention.