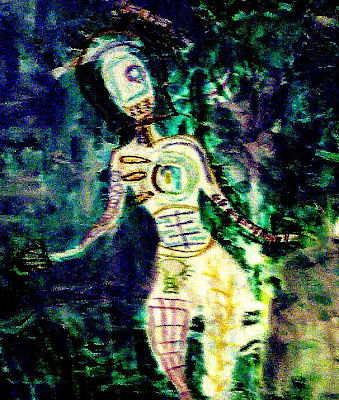 Here's a take on the Goddess from Dragonforge by my friend Dona Nova. You can find more or her terrific work at www.donanova.com.

I finished the third draft of Dragonseed over the weekend. I'll write a longer article about it soon, I promise. I may even throw in a sample chapter or two to sweeten the deal. Stay tuned.
Posted by James Maxey at 5:00 AM No comments:

I've edited my ten chapters for the week as of yesterday, and intend to push on today. My editing at this stage consists of reading out loud to try to catch sentences with missing words, or words that repeat too closely, or sentences that are just flat out clunkers. The story is all hammered out at this point, so I'm doing very little in the way of inserting new passages.

I've used a pottery metaphor before, and I'll expand that metaphor now:

My first draft is all about pulling the raw clay of the story out of my skull and slamming it down onto the wheel. My second draft is all about spinning that clay into something that resembles a vase--with a small base flaring into a large bulb then curving back down into a small mouth. The draft I'm working on now is the stage where I apply the glaze to the pot. Later, when the book goes to press, it's the equivalent of firing the pot in the kiln.

Since I'm not a potter, I imagine there are potters out there who are screaming about how badly I've gotten their process wrong. I invite them to compose metaphors of how throwing a pot is like writing a book.

In other news, a very thoughtful review of Bitterwood appeared this week at the blog Grasping for the Wind. John Ottinger addresses some of the religious elements of the book, and I'm going to use this as a launching point toward addressing a potential failing of my own writing that I'm hoping I can do a better job of in future works. The failing boils down to the fact that I tend to make my heroes all rationalists and atheists. It may at first seem as if rationalist and atheist are synonymous and therefore redundant, but there are actually subtle distinctions. Bitterwood is an atheist--he has lost all faith in a kind or even a vengeful God. But, he's not a rationalist. He believes in magic and demons and ghosts. He just no longer believes that there's a benevolent guiding force in the universe with some great master plan--and, as a result, he's inserted himself into the role of his lost God, and become a nearly supernatural force of vengeance.

Jandra, on the other hand, is a rationalist. Technically, she's also an atheist, but by default rather than through any process of soul-searching. Her isolated upbringing has simply never exposed her to much religious thought. Most atheists (including myself) are reactionary atheists. There is a specific predominant cultural god we have in mind when we say we are atheists. I suppose, technically, I'm denying the existance of Thor or Zeus or the Green Man when I proclaim myself an atheist, but in reality I arrived at my atheism after a long struggle with the the God of Abraham, Issaac and Jacob. Jandra has never been immersed in a culture of god, so atheism isn't really an element of her self identity. She's a passive atheist, not an active denier. She doesn't really know enough about gods to conciously choose not to believe in them.

Where I feel I am lacking is that I've yet to present a heroic character who is a person of faith. It really came home to me while I was writing Dragonseed that I was clearly on the side of Burke, the Machinint, in his ever growing conflict with Ragnar, the prophet. Ragnar's over-the-top old testament style leave him more as a menacing comic foil that a truly rounded out character. Alas, he is who he is at this point; he's a wild-eyed fanatic in Dragonforge, and it was a little too late to change him into a nuanced intellectual in Dragonseed. So, I've added a new character to Dragonseed who is a man of deep faith yet also not a wild-eyed fundamentalist parody. And, it's left me thinking about the characters who will populate further books, and left me wanting to work in a major protagonist who is an unapologetic theist.

Just a few musings on religion on a Sunday morning. Now, I'd best get back to work!
Posted by James Maxey at 6:09 AM 3 comments: 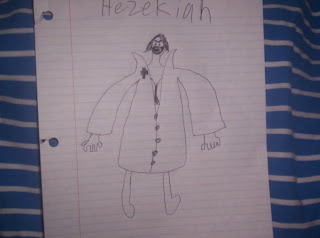 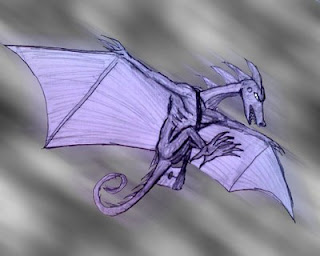 
Finally, I want to mention the next signing I have lined up. I'll be at the Barnes and Noble in Cary, NC on September 9 at 7pm, doing a joint signing with authors Lisa Shearin and Mark van Name. Lisa writes action packed fantasy, Mark writes action packed science fiction, and my own books straddle both fantasy and SF, so I'm anticipating it will be a terrific reading and discussion. Hope I see you there!
Posted by James Maxey at 4:56 AM 2 comments:

I'm doing a book signing this Thursday, August 7, at the Barnes and Noble at the South Point Mall. I've been told there will be cake. I'll also do a brief reading, but don't let that discourage you.

In other news, my hometown paper the Roanoke Times published an article about me and the Dragon Age over the weekend. Luckily, it's on the web. It contains a rather amusing typo. See if you can spot it.

I've gotten another bit of fan art since last week's post, this time of the prophet Hezekiah. I'm holding onto it for the moment in hopes I'll get a few more pieces to make a good blog post by this weekend. If you're keeping score, this is fan art #6, so there's still 4 free copies of Dragonforge available.
Posted by James Maxey at 6:18 PM 2 comments: 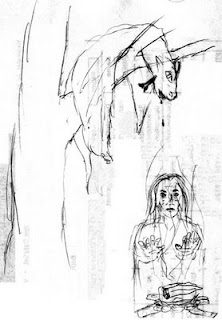 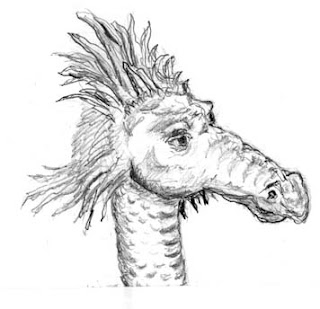 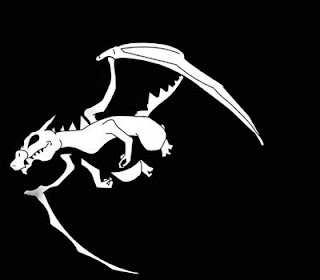 Posted by James Maxey at 6:34 AM No comments: