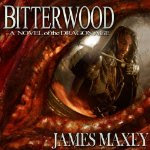 Audible has generously provided me with some free downloads of Bitterwood for me to distribute to reviewers. I wanted to first offer these to readers of my blog. Dave Thompson does a pretty sweet job of narrating a challenging book, switching between 8 year old girls and 100 year old sun dragons with flair. If you've read Bitterwood before, this is a great chance to revisit the book. If you've only read my Dragon Apocalypse novels or superhero stuff, this is a good chance to discover my older series. All I ask in exchange is a review.

If you're interested, just drop me a line at nobodynovelwriter (at) yahoo.com.
Posted by James Maxey at 9:26 AM No comments:

Wahoo! I finished Accidental Gods #1, the Confessions of Cut-Up Girl just a few minutes ago. The first draft is 61k words long; if experience holds, it will probably grow closer to 75k in the final draft as I fill in sketchy scenes with more sensory details.

I'm still a little stunned by what I've done. I remember for years I boasted that I wrote Nobody Gets the Girl in 45 days. What a slacker I was then!

But, I also know that, having these four relatively obligation free day spaced together so closely is a rare thing. I doubt I'll have many opportunities in life to duplicate this experience.

Still, I can't help but dream... what's next? Could I lock myself in a room for a single weekend and manage to crank out a whole book if I had everything just right, like an outline and all my facts prechecked? No internet connection? (I lose so much time succumbing to temptation to look up random facts, like how many revolutions a second a helicopter blade spins, stuff I could just annotate for later research, but instead decide to look up, then check my email, then check facebook, and before I know it I've lost ten minutes. Stupid internet!)

I will also say that, physically, I'm not sure my hands would survive two back to back writing sessions like the ones I just did. Hopefully, my fingers will stop tingling my the morning. To that end, I'll stop typing now.

Done for the day.

16745 words today. Characters completely took over and started making their own choices and I just typed what they told me too.

Also, possibly, I have gone insane.

Too tired to judge.

Just finished my second 15k+ day of the week. The novel is possibly half done. Tonight I found myself facing the prospect that the first draft might require more than the 60k words I had planned. But, maybe not. Today's 15k didn't take me to the end of this section of Cut-Up Girl's life, but this was always the section I had the most content for. I'm not sure the 15k will come as easily for the last two segments, so it's good that I still have plenty to write on this phase of the story. When I start back Friday, I feel pretty sure the first 5k words will flow pretty fast.
Posted by James Maxey at 8:22 PM No comments:

In my previous post, I said I'd be posting the material I wrote to my blog in an effort to keep myself honest. I've changed my mind about that for a couple of reasons. First and foremost, I still believe that readers are precious beings who shouldn't be abused by making them read through a first draft, typos and all. Second, the whole "keeping myself honest" reason is a little stupid. What the hell do I have to gain by lying about my word count?

There's also the fact that I'm writing the first draft in a mostly linear form, but plan for the final book to have a non-linear structure. So, yesterday, I wrote all of Cut-Up Girl's life story from her early childhood to age 17. Tomorrow, I'll be writing about her years as Chopper's partner; Friday, I plan to tackle her celebrity years after her secret identity is revealed. Next week, I'll be writing her end game, where she unravels the lingering mysteries of her past and goes through the important confrontations that will allow her to put her past behind her.

I've never tried producing a book with a non-linear structure before, but welcome the challenge. I'm doing a lot of things differently with this book, trying to break away from the standard ways I normally construct my chapters and plots. This is a risky move... I feel like I've gotten pretty good at writing novels built around conventional plot structures. But, you can't grow as a writer if you don't try new things. Most important, the structure is really growing out of Cut-Up Girl herself, whose personality is somewhat fragmented. She's someone who has trouble explaining herself to the rest of the world, with everything she reveals about how she made her life choices only raising more questions. You won't be able to see her by studying a single thread; her threads have to be woven into a complete tapestry for us to see the whole picture.

I feel good about tomorrow, confident I can do 15k again. The next section of her life is the one I feel I most understand, though it's also the trickiest content since its the part of the book that focuses on the least likable character in the book. Chopper is just a creep; a sadistic vigilante with a racist streak and a pervert to boot. But, he's also the man Cut-Up Girl falls in love with during this part of her life. I've got less than 24 hours to fall in love with Chopper myself, so that I can show him as something deeper than a stereotype. A tough task... but that's what makes it interesting.
Posted by James Maxey at 7:39 AM 4 comments: