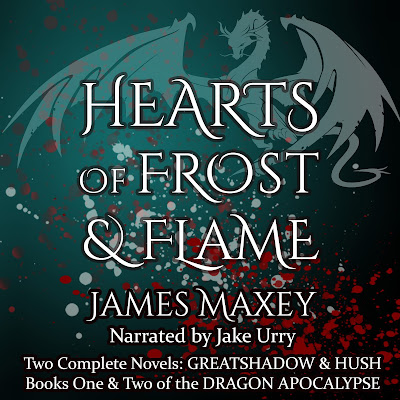 I'm pleased to announce a new release in partnership with master narrator Jake Urry, Hearts of Frost & Flame! This is actually one of two Omnibus collections we're called "Dragon Duologies." Hearts collects the previously released editions of Greatshadow and Hush, and the follow up, Hell & Back, will collect Witchbreaker and Cinder. Since you can now get two books for one credit, this is a great deal for Audible subscribers. But, hold on! I've got an even better deal than two for one! I need reviewers, so I'll be happy to send you a free code in exchange for you considering a review on Audible.

If you've read these books in print before but never listened to them in audio, this is a great chance to revisit the books. Jake Urry was born to voice Stagger, and really brings the book to life. Don't the shy! Start listening today by signing up to get a code here.
Posted by James Maxey at 11:24 AM No comments: 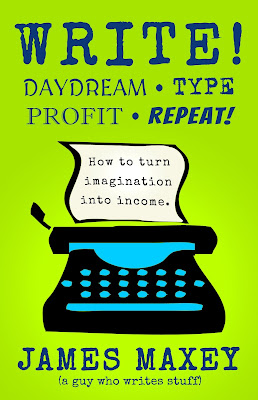 How to Be Original While Following Formulas


My favorite sandwich is a Reuben. Luckily, this is a pretty easy sandwich to find on menus anywhere I travel. When I'm on the road, I like to be adventurous, and if I see something really unique on the menu, I'll give it a shot. This is how I wound up eating a Belgian waffle covered in sausage gravy in a small restaurant in West Virginia. But, lots of times, the menus from state to state aren't all that varied. So, if I'm facing a page of fairly standard burgers and subs, and a Reuben is available, I'll give it a shot.

The standard recipe for a Reuben, if it's followed faithfully, makes a pretty awesome sandwich each time. It's basically five ingredients: Rye bread, corned beef, Swiss cheese, sauerkraut, and Thousand Island dressing. The best preparation is on a griddle with some butter. A toasted Reuben is unsatisfying, and a cold, uncooked Reuben is an abomination. Properly cooked, the rye provides a slightly bitter note, sauerkraut brings acidity, the corned beef gives it salt and fat, which are complimented by the sharpness of the cheese, and the Thousand Island dressing adds sweetness to contrast with the other flavors. It's fatty, salty, sour, and sweet all at once, with a nice protein kick from the corned beef. It makes my mouth happy.

Just to put you at ease, I haven't forgotten that this is a writing book. I promise I'm going somewhere with this.

Readers want originality, but spend most of their money on familiarity. It's the same reason I'd like to order a different sandwich in every city I visit, but wind up ordering the same sandwich again and again. If sandwiches were free, I'd be more daring. These days in a bar, sandwiches can be ten bucks a pop. I kind of want to know I'm going to be happy with what I order. The same impulse drives fiction purchases. Sure, in a perfect world, they'd read anything and everything. Alas, time and money are finite quantities. If you found a type of book you like, it makes sense to keep buying that type of book, as long as things stay fresh enough to keep you hungry for it.

This is one of the biggest challenges for a fiction writer who pursues a long-term career. Repeat readers get hooked a certain story formula. When Arthur Conan Doyle created Sherlock Holmes, he was following a formula established by Edgar Allan Poe. An eccentric genius solves baffling mysteries that thwart the best efforts of the police. There can be some variety; perhaps it's a murder, perhaps it's a stolen heirloom, perhaps someone has been kidnapped. The case will always be solved by the genius noticing small details others have missed, or else interpreting details correctly after the official investigators have leapt to the wrong conclusion from the same clues. In no case will the official investigators ever be allowed to solve the murder before the genius. They aren't even allowed to be useful except occasionally they'll be on hand to help take the criminal off to jail in the final scene. The criminal is always apprehended unless they are a mastermind who will serve as a foil in future stories, or sympathetic people who committed the crime for the best possible reason.

Subplots can exist. You might have a long running mystery about a crime that the detective failed to solve early in his or her career. You might have a love interest, or a series of them. Still, the formula of genius, oafs, clues, solution must predominate. If you break the formula, by just leaving out one of the ingredients, you'll have an unhappy reader.

Which happens with Reubens. Sometimes, I'll order a Reuben, and it's not on rye, but on whole wheat, or maybe sourdough. Neither are right, but they aren't necessarily a disaster. If any bread has been cooked on a griddle with a little butter it's going to taste pretty good. But, visually, the sandwich will be off. I can look at it and know that care wasn't taken in the preparation, that it was slapped together with whatever was on hand. If the bread is wrong, other things can be off. Sometimes, it's not corned beef, but roast beef. They might swap Swiss for provolone. Hey, they're both white cheeses, who's going to notice? I'll notice. The absolute worst "Reuben" I was ever served was on an Italian sub roll with no sauerkraut, just lettuce. I mean, at that point, why bother? Just tell me you can't make me a Reuben. I'll order something else.

Maybe you don't want to be a line cook, cranking out someone else’s recipe again and again. Maybe you've got all the steps down, but this isn't really your sandwich. The Reuben doesn't belong to you, no matter how well you execute it. You want to make a name for yourself, and improve upon what's already a perfect sandwich.

It can be done. I've eaten that sandwich. I was at a bar in Raleigh and spotted a "Far East Reuben" on the menu. The formula was a standard Reuben, except that the sauerkraut was swapped with kimchi. Brilliant! Kimchi and kraut are both fermented. They have the same underlying sourness, but kimchi adds hot peppers to the mix. Putting it onto the sandwich instead of ordinary kraut was genius! It respected the original recipe, while at the same time taking the sandwich in a new direction and making it especially rewarding. Whoever was behind that sandwich could break the formula because he or she understood the formula. They knew the role the kraut served, and found a substitute that fulfilled the original role and brought in something extra.

This is how you, as a writer, can express your creativity. Master the recipes, and understand the purpose of each story ingredient. Then, find a better ingredient to substitute. In my own case, I've twice created fantasy universes. A vital ingredient in any fantasy is the magic. Magic is the whole reason people pick up a fantasy novel. Magic serves to stimulate a reader’s sense of wonder. Magic also introduces a wild card into the plotting. Anything can happen! For my Bitterwood universe, the ingredient I chose to tweak was the magic. Instead of coming up with rules for a supernatural universe, I decided that all the magic was going to follow science fiction rules. Everything magical in the story could be explained by technology and chemistry and biology, with a touch of theoretical physics to spice things up. The science fiction still served the same purpose at magic, heightening the sense of wonder and building in the possibility of miraculous happenings that could provide unexpected plot twists. It also provided plausibility (I hope), and I'd like to think that some readers found themselves intrigued by some of the science fiction concepts and went on to learn more about reality, the way that watching shows like Star Trek inspired me to learn more about space.

After I wrote the Bitterwood books, I tossed out my own recipe and started fresh on the Dragon Apocalypse books. This time, magic would remain magical. What I substituted out instead was the cast. Traditional fantasies are built around certain character types. There's a great deal of variation, of course, but fantasy novels often put together teams of characters and you'll find people playing the roles of warriors, wizards or clerics, and rogues. I decided to swap out these traditional stereotypes for superheroes. Of course, no one in my Dragon Apocalypse books ever identifies themselves as a superhero, or would even know what the term meant. But all the characters have superpowers, most have code names, and most have costumes. By introducing characters who are physically invulnerable, or who fly, or who have super strength, I upped the stakes on the action, allowing me to write over-the-top action scenes that wouldn't have worked with ordinary human characters. Since many of my characters couldn't be harmed physically, that forced me to make most of the peril they faced be either internal or emotional. In sparing them physical pain, I was able to amplify mental pain.

It's yet another paradox of writing. You should love your characters and want what’s best for them. Usually, what's best for them is torment and suffering. A character not going through some sort of distress or turmoil is about as interesting as a cold Reuben.

Just as a chef needs to constantly analyze the food he enjoys to understand why it’s so satisfying, authors need to analyze the books they love and attempt to discern the ingredients, the purpose of these ingredients, and how they’ve been put together. Once you figure out the recipe for books of a given genre, you’ll understand which ingredients can be swapped and improved upon, so you can give your readers a book that is both what they wanted, and much more than they hoped for.

Write! will be released in just two weeks! Order today!
Posted by James Maxey at 3:31 PM No comments: