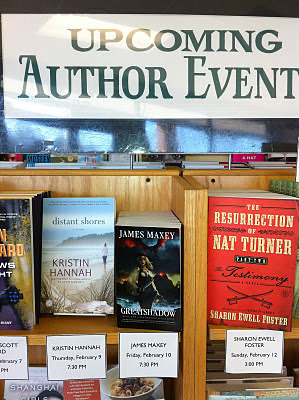 Cheryl's coworker Lisa Vlastellica spotted Greatshadow today on display at Quail Ridge Books on Wade Avenue in Raleigh and was kind enough to snap this photo. This is the first reported sighting of this book in its natural habitat of a book store.

As one might discern by looking at the photo closely, I'll be at Quail Ridge on Friday, February 10 to sign copies of Greatshadow. While the book is officially released tomorrow, I'm calling the tenth my book launch. There will be dragon cookies and possibly a cake with the book photo.

It's a relief to see the book in a bookstore at last. I've been a bundle of nerves all week about the release tomorrow. I started working on Greatshadow back in the summer of 2009. It both exciting, frightening, and a little surreal to know that the book is finally out in the world for readers to find.
Posted by James Maxey at 6:33 PM No comments:

The Year of the Dragon!

I wish I could say I was clever enough to have arranged for my Goodread's Greatshadow giveaway to have purposefully ended yesterday so that I could announce the winners today at the beginning of the Chinese Year of the Dragon. On the other hand, I'll take the serendipity of the development as a good omen.

I'm going to be doing my best to be making this my own personal Year of the Dragon. I'm still tapping out chapters on my first draft of Witchbreaker and am already daydreaming heavily of books that follow it. I pretty much wake up thinking about dragons and go to sleep thinking about them. Perhaps I even dream of them, but I seldom remember my dreams. Perhaps my slumbering thoughts are devoured by nocturnal dragons. Imagination would be an appropriate diet for a primal dragon of nightmares. Hmm. I could totally turn that into a book.

Back to Greatshadow: One week from tomorrow, the book hits shelves. I'm weirdly nervous about it. I mean, this is my fifth novel to see print, and at any given time there's at least one or two anthologies in bookstores that contain a story by me. I've reached a point where it's entirely possible for me to go in and out of a bookstore without looking to see if my books are in stock. But, there's something different about Greatshadow. I've taken some real gambles with the book in terms of style and subject matter. I feel like I should take some gambles with selling the book. I just want to go stand in the isles of bookstores and shove copies into the hands of anyone who makes eye contact and say, "Here! Read this book!"

Which, actually, is kind of what I'll be doing on February 10 at 7:30 at Quail Ridge Books in Raleigh. I'm having a book launch for Greatshadow. I'll read a little from the opening, take some questions, then sign books. Also, I'll be bribing the audience with dragon cookies. (Did you know you can buy dragon-shaped cookie cutters? I didn't until quite recently. Is this a great country or what?)

Anyway, back to the giveaway: I launched the giveaway hoping I might interest a few hundred readers. Some of the other epic fantasy novels that had drawings going on had 400-500 entries. I told myself I'd be completely satisfied if I got 300 entries.

I wound up with 807 entries. Yowza. I'll give thanks to both Gerard Miley's cover art and, of course, the positive energy that flowed throughout the universe as the Year of the Dragon approached.

Congrats, all! I'll have these in the mail to you tomorrow!
Posted by James Maxey at 6:09 PM 2 comments: 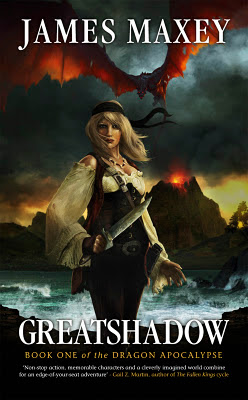 At last! I arrived home yesterday and found a case of Greatshadows! I was starting to worry I wouldn't see any actual copies of the book before it turned up in bookstores. With the release date only a little more than two weeks away, I'd hoped to start giving away copies weeks ago, but better late than never!

For advance readers who were promised copies last month, be patient, I'll start mailing out those copies next week.

For anyone who would still like to get their hands on a free advance copy, I'm pleased to announce my first ever giveaway through the worlds largest website for book reviews and recommendations, Goodreads. Ten copies will be given away through Goodreads from readers who sign up for the give away by January 23. This particular giveaway is limited to US readers; I'm investigating arranging a giveaway in other countries, so if you're one of my international fans, stay tuned!

If you're not a member of Goodreads, signing up is easy and free. To enter the drawing, visit Goodread's Greatshadow page.
Posted by James Maxey at 8:48 AM No comments:

Tune in to The State of Things!

Tomorrow (Wednesday 1-11) I'll be a guest on The State of Things on my local NPR station, WUNC. The show broadcasts live at noon, though I think I'll be on during the third segment of the show, probably closer to 12:40. The show also rebroadcasts each night at 9pm, and can be streamed live from the WUNC webpage. Archives of old shows can also be found there.

I'll be talking about my two latest releases, Burn Baby Burn and Greatshadow, telling the stories behind the stories. Tune it tomorrow!
Posted by James Maxey at 12:51 PM 1 comment:

Nobody Gets the Reviews!

Back in 2000, when I sat down to write Nobody Gets the Girl, I was unaware of any stand-alone, original superhero novels that had been written since the 1930s. Prose superheroes had a good run in the pulp era, but once comic books and superheroes became almost synonymous the only superhero novels published in recent decades were either liscensed stories featuring comic book properties like Batman and Superman, or else the shared world Wild Card novels.

Nobody hit book stores as part of an early wave of independent superhero novels, but, in 2003, you could have collected all these novels onto a single smallish bookshelf. But, in the last few years, superhero novels have experienced a grand awakening, facilitated in part by the ease of self-publishing on Amazon. Now, dozens of new ones turn up each month, more than I can keep track of.

Fortunately, there is someone out there who is keeping track of these things: Eric Searleman and his website SuperheroNovels.com. And, while his focus is on new releases, I'm honored to report that he today published a review of Nobody! My favorite line from the review is his description of my protagonist, where he captures the fan-boy geek at the core of the character: "The guy is an invisible horndog. And if you think about it, that pretty much describes most of the men who attend the San Diego Comic-Con. They’re all invisible and they all want to sleep with sexy superheroes."

And, as long as I'm talking about reviews for Nobody, a second one also turned up last week at a blog called JohnnySaturn.com. It's just a brief mention on his way to talk about other stuff, but he does say "that this is the best superhero prose I’ve read since August Grossman’s 'Soon I Will Be Invincible.'"