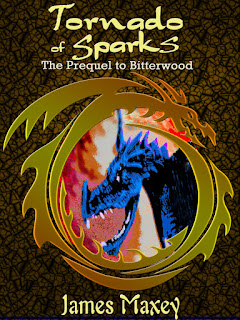 This story is a perfect starting point for readers new to the Bitterwood trilogy. For readers who've already read the series, the story sheds new light on the early lives of many of the members of the core cast. Enjoy!
Posted by James Maxey at 2:41 PM 3 comments:

This Saturday, 9-15, I'll be doing a signing from Noon until 2 with fellow authors John Hartness and Stuarte Jaffe at Market City Comics and Games, 1110 W Green Drive, High Point, NC.

In October, I have three events:

On October 20, I'll be doing a meet and greet with other Hillsborough authors at the Eno River Gallery in Hillsborough, NC from 10:00am to 11:00am.

Then, the following weekend, I'll be teaching a class at the main branch of the Orange County Library in Hillsborough from 10:30 to noon. The class is called, "How to Write Fast: Tips and Tricks for Blasting through Writer's Block and Jamming Out 10,000+ Words a Week."

Also, I currently plan to be selling books in front of Purple Crow during Last Fridays in Hillsborough on September 29, though I made those plans all the way back in June and should probably check back in with the owner to confirm this.

Whew! Busy days ahead!
Posted by James Maxey at 7:02 PM No comments:

I'm currently mentoring a high school student on writing, and one of his questions was what advice I might have for him on how to develop his writing over the next five years. I thought my answer might be of use to more than just him, so here's my advice to young writers:
First, write a lot. Then write some more. Keep track of your word counts. When I'm working on a book, I try to produce 10K new words a week. Of course, this is followed by a lot of revision time, so my average word count for the year is far less than 10k a week. Still, I would consider any year where I haven't produced at least 100k of new writing to be a year of wasted opportunities. Writing fiction is a lot like trying to make a living buying lottery tickets. Odds are, most of the things you write won't pay much. But, the more you write, the greater the odds that something you produce going to bring a big payoff. The odds that you can write one book and make any substantial income from it are poor. Write ten books, and you really pull out from the pack.

Second, read what's being published today. One problem with formal English Literature studies is that classes tend to focus on books written decades or even centuries ago. Go to bookstores and study the new releases. Find out what magazines are actually in stores. Make note of who is publishing what. Various publishing houses have specific tastes; the line of books released by Baen is very different than the line of books released by Tor or Pyr. The short stories published in Analog would never see print in Realms of Fantasy, and vice versa. (Especially since Realms of Fantasy folded last year.) You'll need to look at http://www.ralan.com/ for current market information and search for webzines and anthologies that want this type of story. The markets change every month, so if you don't see an obvious market at first glance, don't despair. Sooner or later, a new market will come along.

Third, learn everything. Map out the boundaries of your ignorance and make a concerted effort to explore new intellectual frontiers. I have days when I wake up and think, wow, I really don't know anything about sailing a tall ship, or how salt winds up on my kitchen table, or the history of the Mayans. So I go and learn about all these esoteric and seemingly unrelated things. Sometimes, the information winds up in my writing. Most of the time, it doesn't. But I never know what obscure bit of trivia I might need to create a satisfying story. To write Greatshadow, I had to know about volcanoes and tidal waves, jungle flora and fauna, archeology, medieval fighting equipment, aboriginal cuisines, various religious traditions, political concepts like anarchy and theocracies, circuses, superheroes, fabrics, how books were made in the premodern era, mosaics, varieties of alcholic beverages, lots of things about different animals (since I have a character who's a shapeshifter), caves, the economy of fishing, Greek, Norse, and Egyptian mythology, palindromes, and psychology. And that's really not an exhaustive list. Facts are the most important fuel for imagination. The more you know, the more you can make up.

Finally, if you want to play the blues, then you gotta pay your dues. You've got to get out and experience the messier parts of life. Get your heart broken a time or two, and break a few of your own if you have the courage. Put yourself in situations where you don't feel safe or comfortable. If you find yourself in a position where all your friends thing the same way you do and share your values, then go out and find some different friends. Writing is a kind of craziness where you have to have a hundred different people in your head, and they can't all be nice people. And even nice people have dark secrets. Learn them. Earn your own. At the risk of being morbid, all good fiction is about pain and loss and alienation (which often lead to joy, wealth, and comraderie). You don't have to go out and intentionally create these feelings in yourself; they will seek you out. As a writer, your duty is to experience these things honestly and openly. As a writer, your duty is to gain empathy and insight into all of mankind.
Posted by James Maxey at 6:42 AM No comments: 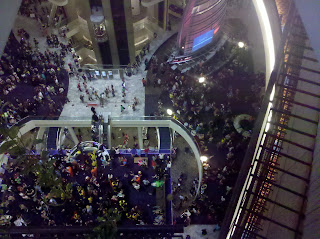 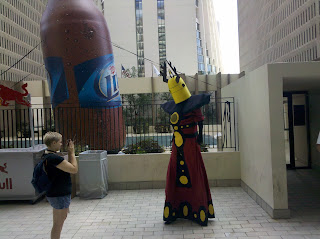 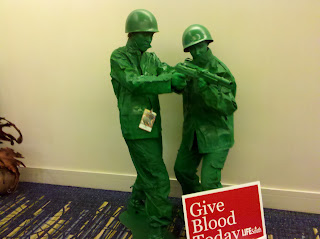 Hands down my favorite costumes. The little peanut shaped cutouts they stood on really sold this.
Posted by James Maxey at 1:32 PM No comments: