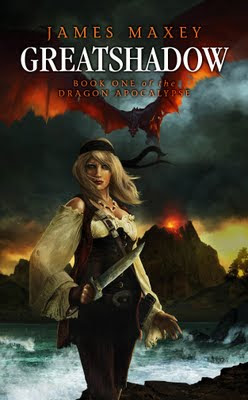 Stay tuned!
Posted by James Maxey at 5:25 PM No comments:

A New Nobody Gets the Girl Review

For a book that's been out for almost 8 years, Nobody is still getting the occasional review. Here's the latest by DarkCargo. And, 8 years on, I'm still tickled when I see people talking about my book!
Posted by James Maxey at 6:30 PM No comments:

Wow, over a month since my last post. What can I say? I've been working hard on the second draft of Hush. Sunday I sent out chapters 9 and 10 of the book to my wise-readers, bringing me to the mid-point of the book. My plan is to be done with the second draft by the end of July, though things might spill over into the first week of August.

The second draft is flowing much better than the first draft did. I've still got a lot of work left for the third draft, but at least I'm no longer fighting the drowsiness and low energy levels I was facing during the winter when my thyroid condition hadn't yet been diagnosed. My latest bloodwork still had my thyroid levels a bit low, but I feel normal again. I can sit and type for two hours without needing a nap. My dosage for my medication has been tweaked even higher starting this week, and I'm excited about the possibility that maybe in the months ahead I can crank out two to three chapters a week plus a blog post as well.

In other news, my class on ebook publishing at the Orange County Library was well-recieved and I've been invited back for a second class on writing, "How to Get Past the First Chapter and Finish Your Novel." It's going to be on Saturday October 8 at 10am. Call the Orange County Library at 919-245-2536 or email Jessica Arnold at jarnold@co.orange.nc.us to sign up for this free class.

Finally, Greatshadow is already available for preorder on Amazon! No cover yet, but still pretty amazing. January 2012 is going to be here before I know it.
Posted by James Maxey at 9:33 AM No comments: