PUT DOWN THAT HOOK!

One bit of advice often offered to beginning authors is that you should open your story with a hook. I think this advice is responsible for millions of terrible beginnings, openings with overwrought action bits that wind up confusing the reader more than drawing him in. The story opens with a gun going off. It starts with a bang! Or, the story opens with the character dangling by his fingernails from a window ledge. Tension! Suspense! Spare me. It's not that such openings are always wrong, it's just that trying to open a story with suspense kills the best part of reading something suspenseful. You want the stakes to be rising with each page, as the machinery of the plot keeps clicking forward, cog by cog, until you know that when you turn the next page something will have to give. If you start your story at a moment of peril, where do you go from there? The tension either has to decline, or else ratchet up from such a high baseline that it creates unintended comedy.

Instead of a hook, what a writer really needs is a strategy. Anytime you sit down to write a story, you have several important things you want your reader to know quickly. Who is the story about? What's their problem? Why should anyone care? Where and when is the story taking place? If it's science fiction or fantasy, what are the rules the character has to obey in regards to commanding miracles?

What used to paralyze me when I was starting as a writer was the seeming impossibility of getting every important detail on to the first page. I remember one story I wrote about characters exploring an ice-cavern on Mars. It was kind of important to make sure the reader knew they were on Mars, instead of just a glacial cavern on Earth. So, I had to sprinkle in lots of references to Martian terrain, have the characters mention the temperature and pressure of the atmosphere, talk about the gravity as compared to what they were used to, etc. I was so busy explaining that they were on Mars that I didn't really get around to explaining the family dynamics of the characters until a few pages later. The hero was a 12 year old boy who'd been born on Mars, and he was exploring the cavern with his mother, a long-term Martian colonist, and her new boyfriend, a colonist who'd arrived on planet only a few months prior. The tension between the son and the boyfriend is the emotional heart of the story, but someone reading the first page could be forgiven for missing that fact. On the other hand, if I tried opening the story with the son and the boyfriend squabbling and the mother trying to play peacemaker, the fact that the story was unfolding on Mars then seemed like arbitrary window dressing. Arguments like this happen in a million living rooms all around the world. Why does being on Mars make it different or special?

At this point, I'd like to tell you how I solved my dilemma: I wrote another story. I set that one aside after a dozen rewrites and moved on. Because, fundamentally, I didn't have an answer to the question of why being on Mars was vital to the story of their family dynamics. I was just using cut-and-paste plotting, taking a story that could be told anywhere and jamming into a setting I thought would be exotic. SF editors of better magazines are looking for stories that blend with their settings in such a way that they could only be told in their specific time and place.

Eventually, I became better at imagining stories that blended character, setting, and plot in insuperable relationships. But, I was still faced with the problem of how to get all my information on the page in a way that would draw readers in. Even today, I agonize about my openings, and they often wind up being the very last thing I write. This was definitely the case with my most recent novel, Bad Wizard. It originally opened with the current chapter one, with George "Grinder" Greer staggering his way through Washington, DC. I defaulted to this opening because Bad Wizard is set in a specific historical era, and Grinder seemed like a decent character to establish the time frame. I reveal he's a Civil War veteran, though he was a young teenager when he served. Now, he's a member of the Secret Service, protecting Oscar Diggs, the Secretary of War. Opening with Grinder gave me a character firmly grounded in our reality, so at the end of the chapter when he encounters Dorothy Gale and her magic slippers, the introduction of magic is a great way to close out that chapter and encourage the reader to turn to the next page. As an opening chapter, it had its merits. Alas, it was the wrong opening for the story.

So, the last scene I actually wrote for the book was the prologue, where Dorothy Gale is introduced in the first sentence. The book is mostly about Dorothy. The best possible strategy is to put her front and center on page one. Rather than put Dorothy in some sort of physical peril, I open with her at the funeral of her Aunt Em. We swiftly learn that her aunt and uncle have passed away, and Dorothy is now wondering what she will do now that her last relatives have passed away. She goes back to the farm lost in thought, and finds the local banker nailing a notice to her front door. The looks at the notice, and reads aloud the word that stands out. The last line of the first page is also the first line of dialogue in the book, a single word: "Foreclosed?"

Winged monkeys and witches can menace Dorothy in their own good time. For my opening, I'm counting on more readers being able to empathize with her real world problems. She's a poor Kansas farm girl about to be kicked out of her home. She's unhelpfully told she can probably find work in Topeka, but has no idea how she can get to Topeka and survive there. She has nothing of value to sell... until she remembers those strange silver slippers that were found next to her in the field after the tornado. Line by line, I guide the readers into Dorothy's world, first attempting to shape an emotional attachment by touching on a problem that most people can identify with. The life she knew is coming to an end against her will; what will she do next? Only after the emotional attachment is formed do I introduce the slippers, and reveal that Dorothy's reality is different from our own because of the existence of magic.

This is now a pretty common strategy for me. Every story is different, and every story will reveal how to tell it eventually. But, just glancing at my short story collection There is No Wheel, of the ten stories, five of them contain the name of the protagonist in the first sentence. Three of them have the protagonist's name as the very first word. Only one story has the name of another character appear before the protagonist. Most of the other stories are told in first person, so there's an "I" in the first sentence, and you might not know the name of the protagonist, but you swiftly gain a sense of who they are based on their unique voice. Only two of the stories open with the characters in any sort of near term peril. For the most part, I'm patient. Establish the character. Establish where and when they are. Clarity is my number one goal. The best hook of all is for your reader to quickly and easily grasp what's going on.

Of course, just saying who your character is and where they are at can be boring. What you need are telling details that reveal your character and your world indirectly. This is the opening to my short story "Echo of the Eye."

Kidd pumped quarter after quarter into the washer at the Laundromat. The humid air was thick with the smell of bleach and Tide. The water in the window of the machine began to turn pink. A career as a butcher had left Kidd unusually skilled at removing blood stains.

The reader will suspect that Kidd is the protagonist, since he's introduced first. The smell of bleach is a strong sensory connection, an aroma almost everyone will be familiar with, and a familiar scent can instantly link a reader to your world. The mention of a brand name establishes that the story is taking place in contemporary America. The water turning pink is meant to be slightly disturbing. Is it because of blood? The next line establishes that there is blood present, though it presents the benign explanation that Kidd is a butcher. And he must be a down to earth guy, doing his own laundry. Still... hopefully, the reader leaves the first paragraph feeling the possibility that something sinister has happened.

You probably won't find many writing books advising you to open a story with a character doing laundry. But, soap suds were the way to go with this particular tale. If you're having trouble finding the right opening for your story, try the direct approach. Introduce your character in the first sentence. Establish where they are at the moment the story starts, whether it's on a starship, in a living room, or out in a forest. Focus on a simple sensory detail, preferably at scent, taste, or texture, that will engage the core of the reader's brain. Give them an intriguing fact to close the paragraph, then move on. Your readers will follow.
Posted by James Maxey at 6:43 PM No comments: 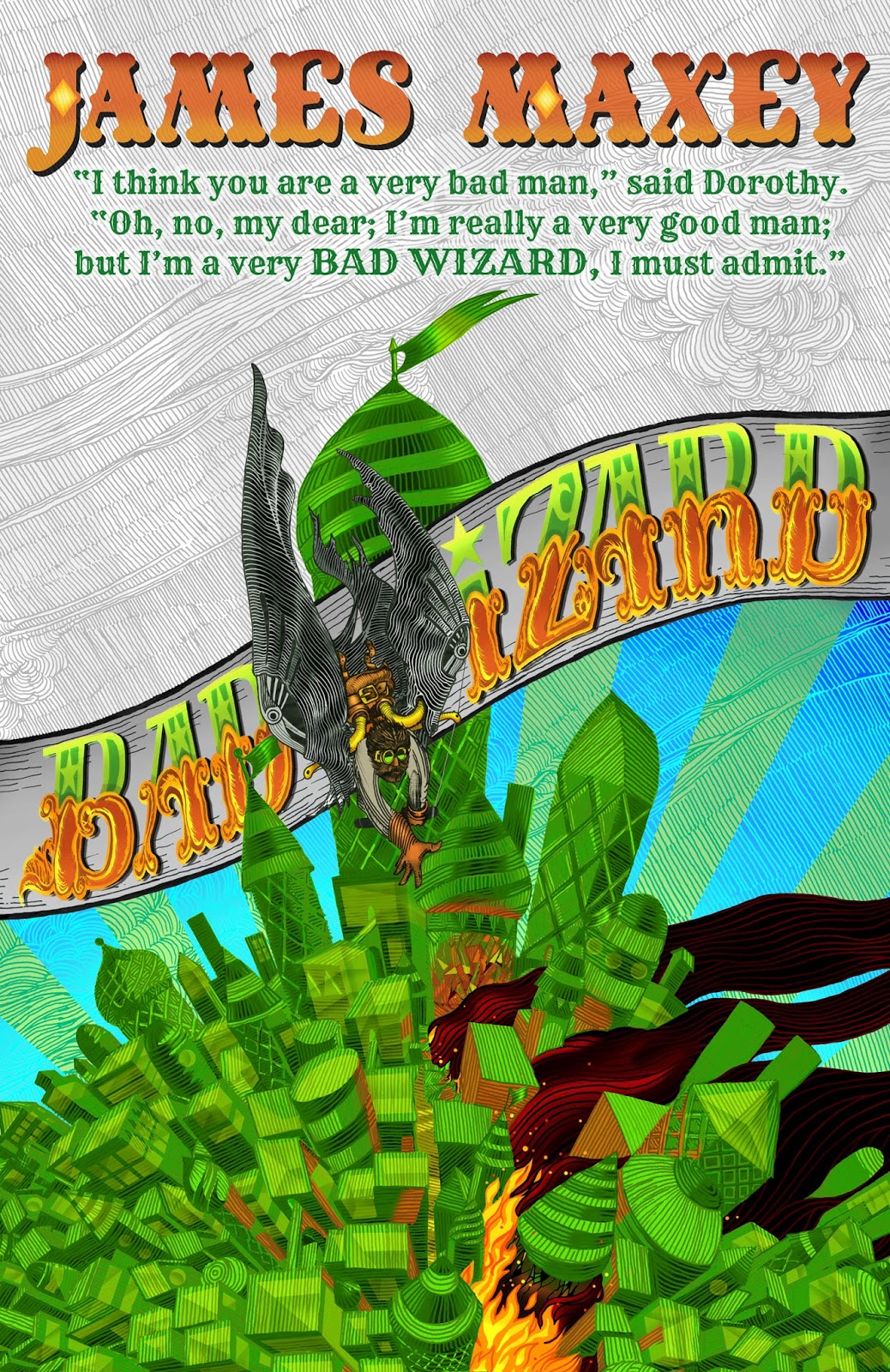 Yay! Goodreads is finally showing a listing for Bad Wizard, so I'm finally able to arrange a giveaway there! Now through November 15, Goodreads users can enter to win one of five signed copies of my latest novel. Just follow this link to enter, and good luck! ﻿