The Evolution of a Cover 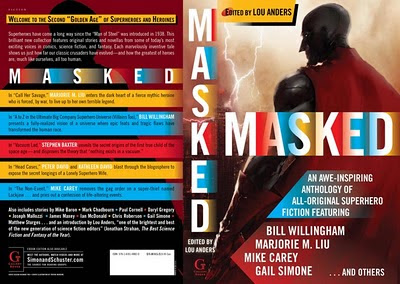 This summer I have a story coming out in an anthology called Masked, edited by Lou Anders. The cover design is by Richard Yoo, and he's just posted an essay showing the various drafts of the cover, which I thought was an interesting glimpse into the publishing process. I'll be talking more about Masked as the publication date draws closer. I'm really excited about being in this anthology. A lot of previous superhero anthologies have missed the mark, coming off as ironic critiques of superheroes rather than enthusiastic celebrations of them. This time, Lou took the trouble to solicit stories from people who actually liked superheroes, and I think the quality and tone of the whole anthology are going to produce a lot of five star reviews on Amazon (and, hopefully, a lot of sales). More news soon!
Posted by James Maxey at 5:59 AM

We should clarify. Richard Yoo (not Woo) is the designer. He did the typography/layout. The artwork is by Trevor Hairsine, who is well known as an artist on many titles for both 2000 AD and Marvel comics.

Thanks for that info, Lou. This is what I get for rushing out a post a half hour before I'm supposed to be at work. I'm really thrilled with the final cover, by the way. It's lucky that the cover design adapted so easily to the new title. That definitely wouldn't have been true of some of the early designs.

Is this the story from the Halloween contest (which I loved) or something new?

Frazier, this is indeed the story from the Halloween contest. Glad you liked it!