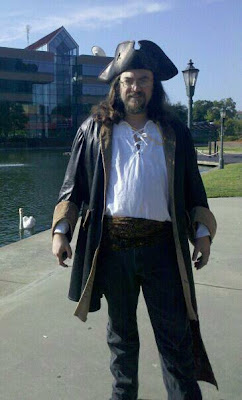 Avast! Little by little, I'm building a pirate costume to enhance my con-attending experience. When I first started going to cons, I was sort of mystified by the costumed attendees. My enthusiasm for dressing up in costumes had vanished pretty much around the time I stopped trick or treating, and I just wasn't sure what to make of all these grown men in storm trooper suits. I mean, I'm geeky, even nerdy, but it just seemed like there was some sort of danger line you crossed over once you started dressing up as your favorite film characters.

But, I've been going to cons for about five years now, and I'm pleased to report that I have managed to loosen up. No longer to I look upon the costumed hordes as wierdos who've had trouble growing up. Or rather, I've finally had the courage to admit that I may well be a wierdo who's had trouble growing up, and what's wrong with that?

My pirate costume has fairly organic origins. Basically, about two years ago I decided to let my hair grow and gave up on shaving, for the most part. Last year, I took a road trip with Cheryl along the inner banks of NC, where about every third village claims to have been the home of Blackbeard. And, looking at drawings of Blackbeard, I thought: You know, all I really need is the hat, and that could be me.

But, there's sort of a slippery slope. Once you buy the hat, you start thinking you need a pirate shirt. And the pirate shirt doesn't look right without a pirate coat and sash. And, of course, I also need the boots. And a cutlass. I could have dumped out $500 all at once on these things, except, you know, I don't often have a spare $500 sitting around. So, I've been building it a piece at a time. I figure that five years from now, I should be up to the eye-patch and parrot. If I get to the point that I start decorating my car to look like a ship, please stage an intervention.

Anyway, I didn't set out to blog about my costume. I meant to blog about ConCarolina's. This year, I've heard rumors that the over 1000 people attended, and that seems plausible. The programming track was very rich this year, with tracks on science and the paranormal in addition to the writing, anime, and media tracks. I think the richness of the content makes ConCarolina's really stand out.

Highlights of the con for me included the "Year in Science" panel with Stephen Euin Cobb. We've been paired together on panels before, and play off each other well. We talk about the latest advances in robotics with the same high energy enthusiasm other guys have when they talk about football. Hopefully the audience has as much fun as we do! I also did a "Where's the Proof?" panel about ghosts. I was the only skeptic on a panel with three ghost hunters, including two professed pyschics. I anticipated hostility, but the hour actually went by as a rather genial discussion, and, even as a person who doesn't believe in ghosts, I had to agree that ghost stories give a little extra spice to life, and I wouldn't want to live in a world without them. Finally, there was a panel about creating protagonists that was led by Ed Schubert and I thought this was one of the best writing panels I've ever taken part in. A lot of writing panels at cons tend to focus on fairly vague generalities, but I thought Ed did a nice job at drilling down to get at the heart of why some protagonists resonate while others are just duds.

I was on eleven panels in total; the fact that I'm not mentioning one here doesn't mean it wasn't good, just that, after what amounts to 11 public speaking events in a span of roughly 44 hours, I arrived home with a brain full of mush, a big grin on my face, and partial amnesia. If anyone out there has a photo of a bespectacled pirate behaving erratically in a hotel lobby, please don't try to blackmail me. I'm currently saving my money for a good pair of boots! Yaarrr!
Posted by James Maxey at 7:51 PM