So, you're probably expecting all kinds of photos of people in costumes from my first day at Dragoncon. But, truth is, I didn't snap that many. Instead, when we got to the con, we spent about an hour navigating the check in progress (which, in defense of the con, was extremely well organized, but there's only so much you can do in the face of such big crowds). Then, we went and gave blood. That wound up taking almost two hours. Then we went to a panel on luck and coincidence, cruised the dealer rooms, and decided we'd ride the elevator up in the Mariott to see if you could get to the top floor.

It turns out, we actually got to the roof! The Mariott is fifty floors high, so there were only a handful of buildings on the Atlanta skyline taller than we were. It was gorgeous; my cell phone camera couldn't really capture the full grandure of the view. My friend Mr. Cavin pointed out at a bar recently that, no matter how many megapixels my camera has, it's still gathering light through a lense the diameter of a pencil eraser. I'm hoping Cheryl's camera got better pictures; I just don't have an adapter for her media card. 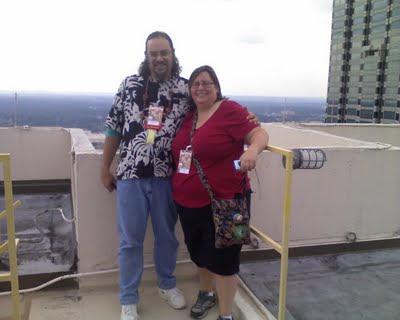 I did try the video feature of my phone. I start by looking down over the edge. Squint, and you can see very, very, very tiny people in costumes milling about on the street.


After this adventure, we went to Princess Alethea's Travelling Road Show, where we partook in a Zombie Haiku slam. My improvised entry:

a shambling horror
bumping into the doorframe
where are my eyes?

Then, we were off to dinner at the Landmark Diner, which proved to be an adventure due to bad directions from the aforementioned Princess Alethea, compounded by bad directions from a cop. But, we eventually navigated our way across countless city blocks to the right location and had some terrific greek salads.

After that.... it was time to come back to where we're staying. I banged out another thousand words of my new novel. Momentum matters!

Now, bed time. Tomorrow, I'll try to get some pictures of costumes instead of cityscapes.
Posted by James Maxey at 8:59 PM