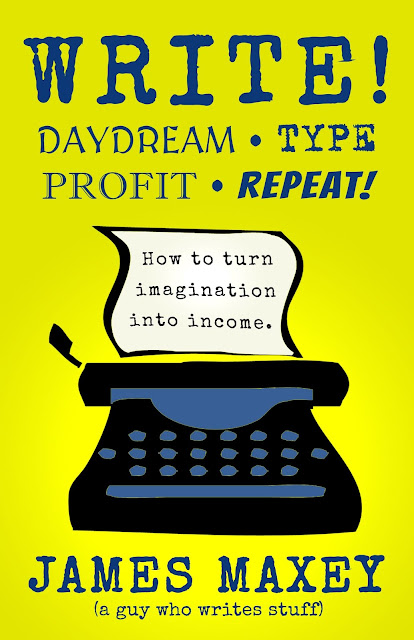 Before I dive in on my final draft of Dragonsgate: Devils, I've taken time to write my first ever book of non-fiction, WRITE! Daydream, Type, Profit, Repeat! I'll announce a formal release date soon. The book still needs line editing and final proofing, which I'll get too after I make another pass on Dragonsgate.

In the meantime, here are the first two chapters to whet your appetite!

Here’s the deal. It’s pretty sweet. This is it. Everything, absolutely everything you need to do to be a professional novelist:

Yeah, I know, you saw that on the cover.

You’ll see it again on the next page. Tear that page out, tape it above your computer, and follow it step by step. If you don’t type at a desk, adapt. Maybe you ride a train to work in the morning and write during your commute. Ask the stranger next to you to hold this above your screen as you work. Don’t let him tell you he has more important things to do. Explain that you’re a novelist. Don’t let him give you any guff!

Also, I should probably clarify that I don’t actually recommend tearing the page out. Cutting neatly with scissors will give you more professional looking results. These words are intended to change your life. Don’t cheapen them with a ragged, torn edge.*

I looked into getting the pages perforated, but that cost a fortune. And, you know, profit.
Well, my job’s done here. Thanks for reading! Sorry if this book turned out shorter than you expected!

*This text here will make much more sense in the final print book than it will on the blog. Here's the graphic from the page. 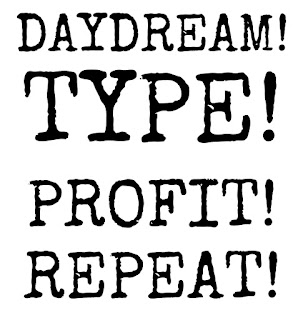 You may feel that my instructions in the previous chapter are a little sparse. Daydream, type, profit, repeat. It feels a bit… underdeveloped.

One of the duties of an author is to pick apart the world and study its component parts. You take something complex and break it down to the essential elements that make something, well, something. A cartoonist learns to replicate a human face by drawing a rough oval and jotting a few lines to indicate eyes and a mouth. ☺

It will be the same with writing fiction. You’ll learn how to break complex things like human lives, world histories, geologic eras, religions, morals, myths, and mysteries down into a string of words that reproduce these things in a reader’s mind as effectively as a circle, two dots, and a curved line can invoke a face.

You might think I dashed out daydream, type, profit, repeat in a matter of seconds one lazy afternoon. The reality it, it’s taken me very close to twenty years to understand my writing process well enough to capture it in four words. Allow me to use many hundred words to explain how I mastered such brevity.

One of my duties when I was Piedmont Laureate for Raleigh, Durham, and Chapel Hill was to teach writing workshops. Planning for these workshops, I did my best to focus on the components I thought a novice writer needed to learn. How to create characters was an obvious topic. I taught another workshop on how to create realistic settings. Plotting. Research. Time management. Anything people asked me about when I taught one workshop inspired me to create another workshop.

Overall, I did close to thirty events, and ended the year fairly confident I didn’t know a damn thing about writing. Everything I’d lectured on was probably useful advice, but I’d always felt compelled to focus on one aspect of writing fiction rather than trying to explain the whole process. In doing so, I was more or less trying to explain how a car works by showing people unassembled car parts. If you’ve never driven a car, and I showed you a detached steering wheel, then showed you a gas pedal, then spent an hour going over the windshield wipers, when you actually sat in a car you might feel more lost than if you’d never gotten any instruction at all. Ultimately, if you want to learn to operate a car, you need to get behind the wheel of an actual car.

I pondered this problem for a several years. How do I capture the sprawling, time-consuming process of writing novels, something I’ve spent half a century trying to perfect, and break it down into something that evokes the whole process at a glance, the way a circle and a few squiggles turns into a face?

I stumbled into my answer by accident. I was doing a writer’s panel at a convention, one of countless “How to Make a Living Writing” discussions I’ve done. There were five people on the panel, and I was the last to speak. One by one, the authors going before me talked about how difficult it was to be a writer. They complained about publishers going out of business, agents ignoring their emails, and how a career that’s hot one day can go cold the next. A big gripe was how saturated the genre markets had become, as self-publishing had transformed the industry from one where a few hundred new titles a year would find their way into bookstores into a new world where thousands of books get published every hour. How can a writer hope to survive against such terrible odds?

I don’t think this grousing is unique to writers. I think if we’d been a panel of five cab drivers, we’d have spent an hour griping about how terrible traffic is with all those amateur drivers mucking up the roads. It’s a legitimate gripe, but look, if you don’t enjoy being a cab driver, don’t drive a cab. If you don’t enjoy writing books, don’t write books.

Writing novels is a completely optional activity. Mankind invented writing roughly 10,000 years ago. The novel as we know it didn’t come into existence until 400 years ago, more or less. For the majority of human history, people have gotten along fine without novels. It’s not too late to turn back. If the hassle and frustrations of writing books cause you to feel hassled and frustrated, give up! Producing a novel is no more important to the world than driving a cab.

Unless, maybe, you have a beautiful and unique vision for a book that you alone can write. A book that might change the world, or, at the very least, a book that at least a few people will regard as a pretty good story. Which, probably, you do, or you wouldn’t be reading books on how to write novels.

Sorry. I’ve gotten sidetracked. I was telling the story about the writing panel. I kept listening to my fellow writers, hearing them express every frustration I felt about my chosen career. Writers work long hours and the most common reward for your work is obscurity, though occasionally you also get poverty. The publishing industry is brutal. The standard contracts offered by most publisher creep right up to the borderline of legal theft. The gripers ahead of me on that panel didn’t need to explain to me how much life sucked for writers!

Then the moderator asked me how I felt about writing as a career. I looked at the audience. All the energy had drained from the room. The authors on the stage had collectively published over fifty novels. Now we were telling a room full of people working on their first novels that only an idiot would want to be an author.

What if we were telling people this because it was true? What if writing novels is an absolutely crap job? What if those people uploading a thousand books every hour to Amazon were hopeless fools? Forget those thousand people on Amazon. What the hell was I doing? Why did I ever want to be a writer? Why was I still doing it, despite knowing the difficulties?

And suddenly, I knew. Like a cartoonist who discovers a face in a few squiggles, I grasped the entirety of my career. I could see the whole process end to end, and it was simple and elegant and beautiful. No wonder I love doing it.

I said to the room, “I don’t know why everyone’s saying this is hard. I daydream and I type and people send me money to keep doing it. It’s a pretty sweet deal.”

And that’s that. You daydream. You type. You get paid. Then you do it all over again. It’s that easy. Why anyone thinks this is difficult is a mystery. It’s not rocket surgery. You aren’t digging ditches. You seldom get tackled by linebackers. You’re getting paid actual money to sit around daydreaming! Also, there’s some typing involved. And some business stuff. Contracts, royalties, taxes, that kind of junk. Don’t sweat it. It’s easy to figure out. Keep your eyes on the big picture. You want to be a professional author? Daydream, type, profit, repeat!

I mean, sure, occasionally it’s a little hard, parts of it. Not too hard. Except for the times when it’s really hard. Speaking from long experience, there are only four difficulties in writing that I would describe as “soul-crushing.”

I look forward to reading the whole thing!