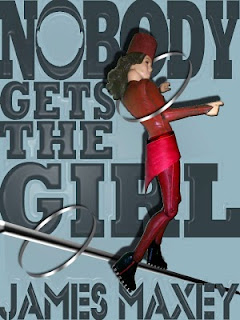 At long last, Nobody Gets the Girl is coming to Kindle and other ebook formats. There's a version live on Amazon right now, but don't rush out to buy it. About an hour ago, I uploaded my latest revision and it may take a day or two to update. The changes were mostly minor; I had a missing space in one of my chapter titles that ran two words together, one paragraph had an extreneous quotation mark, and Cheryl had caught a half dozen typos that I've now corrected. Also, I've been in contact with Mur Lafferty, author of the superhero novel Playing for Keeps and arranged a chapter swap, so that I'm including a sample chapter from her book at the end of Nobody and she'll be including a sample chapter of my book at the end of PFK.
But, the real reason I'd like you to hold off buying the kindle version of Nobody is a bit more commercial. Next Thursday, January 13, I'm going to be talking about the book as a guest on The State of Things, a popular mid-day talk show on my local NPR station! This is a pretty cool thing on any number of levels, but the part of me that enjoys making money from my writing is most excited that I might have a few dozen people download the book from Amazon on Thursday. A few dozen downloads might now sound like much, but there's the real possibility it could shoot the book up into the top 100 Kindle downloads for that day, at least in science fiction. Getting high sales rankings boosts the visibility of the book, so if you plan to download the book, do so Thursday and you'll help me push the book as high as possible.
Multiplying these efforts is the fact that, the night before, on Wednesday, January 12, I'll be a guest at the Regulator Bookshop in Durham, helping promote the launch of Bull Spec #4, which is reprinting my Bitterwood prequel short story "Tornado of Sparks." So, between pitching the heck out of Nobody the night before and the radio appearance, I'm anticipating good things for Thursday.
Now, you may be wondering, how did a seven year old novel being republished to Kindle earn me a slot as a guest on a popular radio show? I've saved the most amazing news for last. Back in October, I met singer/songwriter Jonah Knight at Capclave. I instantly liked his work, and I apparently inspired him when I was talking about my books, since after the con he emailed me asking if I'd mind if he based some songs off of the superhero novel I'd talked about. I said sure, sent him the book and, LO! There are now songs, six of them, a veritable EP that will see release next week. I've had a sneak preview and the songs are awesome! I'd be a fan even if it didn't have lyrics like:
If you feel a chill
And there's no movement on your windowsill
That might be me
I am Nobody.
Jonah will have a link to the songs on his website by early next week. A novel with a soundtrack was apparently unusual enough to earn both Jonah and me slots on the State of Things, and hopefully elsewhere as well.
I'll be posting frequent updates between now and next Thursday to share more information about the e-book, Jonah's album, the Bull Spec signing, and, of course, the State of Things appearance. Stay tuned!
Posted by James Maxey at 6:00 PM

Congrat on the EP, too!

Been wanting to read this for a long time. Now I'll wait until Thursday, I guess. Good news, though.

I need to get working on my Kindle release of my 30's noir revenge thriller with science fiction overtones. Hopefully by March.

TSFB, will your book be going straight to Kindle or will you try to shop it around first? There is some market for what you describe... check out Ghost of Manhattan by George Mann.

Heresolong, you have excellent timing! I just set up my Barnes and Noble account publishing account over the weekend and have finally finished tweaking and uploading all my titles. I just checked and the Bitterwood titles are live right now. Still waiting on Nobody to pop up for sale, but hoping it will be tomorrow or Thursday at the latest. How's that for customer service?

Bought it this morning. Don't spend your 25 cents all in one place. :)

Too late! I bought a hot chocolate at Panera last night. The money was just burning a hole in my pocket. But thanks! It was good chocolate.