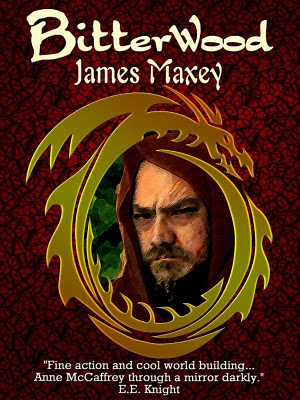 Based on feedback from Bullspec publisher Samuel Montgomery-Blinn, I revised the cover art to make certain the book looks like a fantasy novel instead of possibly historic fiction. When I first started Bitterwood, I was 30. My 45 year old protagonist seemed like he'd be pretty old. Now, I'm 46, and I'll be living the rest of my life with a book where I repeatedly label a character younger than myself an "old man." However, it saved me the trouble of having to find a model to pose as Bitterwood. All I needed to pose as my title character was a scowl, a towel, and photoshop. If any readers think you could pass as one of the main characters in Dragonforge or Dragonseed, let me know.
I uploaded Bitterwood to Kindle on Monday. The preview feature showed the font switching from times to courier in a couple of chapters. But, when I searched the html, I couldn't find any reference to courier, and it showed up as Times in both explorer and firefox. Reading the amazon forums, many people reported problems with the preview tool, so I just assumed it was a glitch. Wrong! When I downloaded the actual file, sure enough, it showed the font problem. This forced me to go back to my files and search for any differences between the changed areas. It turned out, I had two different word "styles" assigned to my ordinary paragraph text. One style was "normal" and one style was "plain." This was no doubt introduced by the fact that a I wrote Bitterwood over several years on multiple computers and multiple world processing packages (I may have started it in WordPro, to give you an idea of how ancient this project is). Anyway, even though I had selected all text and changed it to Times, the base font for the "plain" style was courier. I edited the style sheet and reuploaded this morning, and it now previews fine. Alas, the novel was available for sale on the Kindle store for over a day before I could alter the file, and I actually sold a copy. I apologize to whoever bought it, and hope the font problem isn't too distracting.
So, at this stage of my Kindle journey, I have two bits to wisdom to share:
First, trust the preview tool. If it shows a formatting error, take however long you need to fix it, since there's a lag between the time you publish a file and the time Amazon allows you to go back and edit that file.
Second, if you're working in Word, the very first step I'd recommend before you start editing the file for kindle is to select all the text and use the "clear formatting" command in the style bar. Then, just to be safe, save it as plain text, to make certain you've got rid of all the styles that Microsoft Word so helpfully auto generates. However, once you do have a completely clean copy of the text, styles can save a lot of time if you're applying them to scene starts and chapter titles.
It may take a few days for the revised file I uploaded this morning to go live, so if you want Bitterwood on your Kindle, I'd advise waiting a week. I'll update again once I feel certain that that product that can be downloaded is a product I'm proud of.
Posted by James Maxey at 4:48 AM

James, you could walk down your choice of dark alleys with a scowl that fearsome.

As I already do.