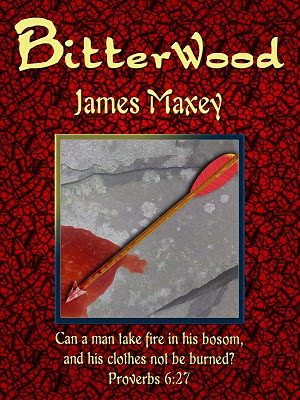 So, here's my non-artist attempt at making my own cover for Bitterwood. I used to do a lot of typesetting when I ran the old computer services department at Kinko's, so I may have gone a little overboard on the fonts--the "Bitterwood" uses three different fonts: Bart heavy for the B, Freedom 9 thin for the W, Dragon for the rest. The background, meant to resemble dragon hide, was a happy accident: The pattern I overlaid in photoshop was really muddy, with the red and black lines blurred, but when I exported it to a jpeg the lines got sharper, which is the exact opposite of what normally happens with a jpeg. Anyway, I liked it, though it may be a little busy.

The arrow is purely digital. My art skills are limited to drawing straight lines, but, hey, that's what an arrow is, pretty much. The stone was photographed at a graveyard in Georgetown, SC, and the blood is ketchup poured onto a white sink.

My biggest concern is the text at the bottom. I was going to use a quote from a review, but changed my mind and went with the quote I use to open the book, since I think it sums up the theme of the novel better than anything else. I'm not often influenced by quotes from other authors when I select my books, and actually like brief excerpts from the work on the cover material. But, maybe I'm in a minority here.

Does anyone have any thoughts or comments? I finished my kindle draft of Bitterwood earlier this morning. I now have some fiddling to do with the HTML, but I may be putting it up on Amazon as early as Monday. I'm probably going to include a chapter or two from Dragonforge at the end of the book as bonus material, and maybe the short story "Tornado of Sparks." If it weren't for needing to work on that, I'd probably upload it today.
Posted by James Maxey at 10:36 AM