This weekend, I walked into my local Barnes and Noble and discovered this: 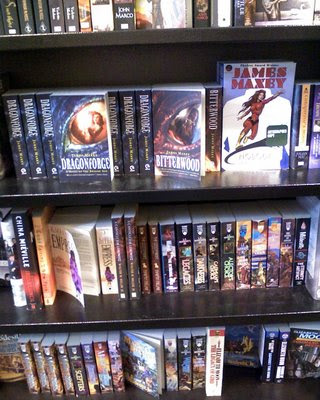 It's my first sighting of Dragonforge in its natural environment on a bookstore shelf. I'm also pleased by the healthy number of quanties in stock, and by the fact they carry copies of my first novel, Nobody Gets the Girl. (In a strange coincidence, a review of Nobody just appeared yesterday on the blog of Loren Eaton. His blog is called I Saw Lightning Fall, a very cool title, yes?) I've done signings at this Barnes and Nobles in the past, at the Southpoint Mall in Durham, NC, and will be holding my official book launch signing there on August 7. Admittedly, this is six weeks after the book hit the shelves, so calling it a "launch" might be a stretch. But it will be my first official public signing for Dragonforge.

The official release date of the book according to the dates stamped on the boxes from the warehouse is today, June 24th. I've just had an email from Oliver Dale saying he found the book at his local store as well. Give me a shout out here and let me know if your store is carrying it. And, if you'd like to get a free Dragonforge button, snap me a picture of the book on the shelf and email it to me at nobodynovelwriter@yahoo.com. Give me your address and I'll send you a Dragonforge button while supplies last!
Posted by James Maxey at 8:54 PM

Bitterwood Rocks!
Can't wait to pick up the new one!