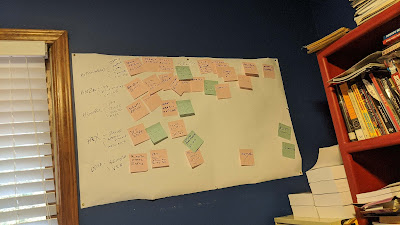 The sequel to Dragonsgate: Devils is Dragonsgate: Spirits. Bitterwood and Nadala team up to journey through underspace to find Zeeky and Nadala's kidapped (dragonnapped?) drake. They wind up in a world that follows different rules than the reality they are used to, and are swept up in a battle between three powerful queens.

Anza, meanwhile, continues her journey out west, encountering dragon species she's never fought before and finding remnants of human civilization that have found new ways to survive in the wasteland.

Finally, Hex has finally accepted his responsibilities as king, and his first act is the abolition of slavery. But his fellow dragons aren't happy about this, and the rebels of Dragon Forge, now led by Elspeth Howell and her mysterious companion known as Surgeon, have their own plans for the balance of power between men and dragons.

It's coming together! I'm technically only 11 chapters in, but some of these are ridiculously long and almost certain to be divided into multiple chapters, so I've probably got at least 14 chapters of material hammered out, with probably at least 20 or 25 to go! It's going to be epic! I promise it will be worth the wait!