Good writing is primarily a result of knowing what words to leave off the page.


A good analogy can be found in the composition of a photograph. Below are two photos of the same shell: 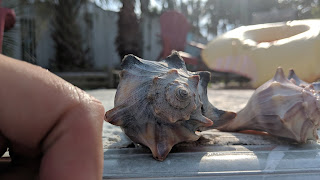 In the first photo, I haven’t really taken the time to frame the shell properly. I didn’t even get my finger out of the frame! Your eyes are drawn to the shell since it’s in the center of the frame, but the image is cluttered by the presence of the second shell, and the background is cluttered. The oddly askew chair and the big yellow pool float are out of focus, but this somehow only makes them more distracting as your eye tries to piece together what it’s seeing. Finally, there’s not a lot of contrast between the shell and the background. It’s pretty much the same color as the fence behind it. 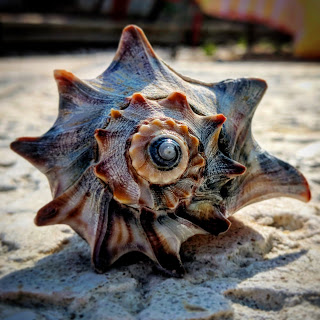 In the second photo, I’ve changed the angle of the shot and have a vastly simplified background. I’ve gotten closer and cropped the image to remove unwanted objects. The new angle means most of the background is lightly colored, making the darker shell stand out. I’ve done some manipulation of the image to oversaturate the colors, making a shell that looked gray at first glance into something far more complex, with tones of blue, brown, and ivory.


Of course, this isn’t an article about taking photos. It’s an article about writing well. When you’re working on a novel, the sheer amount of information you need to convey to the reader can feel overwhelming. You might be balancing a dozen important characters, all with backstories, their own goals, and distinct personalities.  You’ve got a setting to convey. There’s the characters immediate location, but there’s also a larger world and a place in the history of that world. You’re also conveying motion. Even if your characters aren’t moving, hopefully your plot is moving forward. Every paragraph needs to feel like it’s bringing the story a little bit closer to a conclusion.


Given all the things you need to convey, the real art of writing is to treat every page as a carefully composed photograph. What are you wanting the readers to see? Of all the different story elements present, which one do you want them to focus on? What on this page do you want them to remember so that the next page makes sense?


Simplicity is the secret of clarity, and clarity is the key to readers engaging with your book.


Let’s say you’re writing a story in which your character is going to shoot someone. In the first chapter, you show your protagonist loading her gun and putting it into her purse. You go into a crazy amount of detail on the gun to make sure it’s memorable, since it’s important to the plot, and wind up spending three pages telling us the manufacturer of the gun, where she bought it, why she likes this particular gun, and close with a brief history of gunpowder. Then, in every following chapter, you have moments where she looks into her purse and contemplates the gun. Most readers will find this annoying, heavy-handed, and won’t be terribly surprised by your plot twist seventeen chapters later when she shoots her boss.


On the flip side, let’s say you devote a single mention of her putting a gun into her purse in the first chapter. Then she never thinks about the gun again until she pulls it out and shoots her boss seventeen chapters later. Most readers will have forgotten the gun and feel like its appearance in the story is completely random.


Somewhere in the middle is the sweet spot, where you’ve given enough detail that the reader will sense that the gun is important but not so much detail that they grow frustrated at how obvious you’re being.


Let’s go back to your protagonist’s purse: When she opens her purse, you might be tempted to describe the entire contents of her purse, or you might be tempted to just tell us she has a purse and not say another word about it. Personally, I think it would be a wasted opportunity not to describe a few things in her purse, since you might be telling us a lot about her character and backstory with just a few choice details. If we see a key to a BMW, it might hint at her economic status. A wad of coupons for basic stuff like peanut butter might point us in a different direction for her finances. A pacifier could clue us in that she’s a mother. If there’s a can of pepper spray next to the gun, we might deduce she’s really worried about her self-defense. Perhaps she’s been a crime victim in the past. Or, maybe she’s got three clips of bullets. Self-defense no longer seems to be her primary plan for the gun. Not tossing in telling details is a wasted opportunity. Describing every last scrap of clutter in her purse would bore the readers.


If you aren’t confident how much detail to include in a scene, my advice is to err on the side of over-telling, especially during a first draft. If an editor or someone in your critique group reads your story and you’ve overexplained something, they can tell you what to cut. If you leave out too much, they’ll just feel lost and unsure of what you’re trying to say. It’s much easier to tell a reader what he needs to cut than to tell him what he needs to add.


A final thought: If you’re a person who admires literature enough to want to try your hand writing a novel, you very likely have a broad vocabulary and an appreciation for ambitious prose that tells a story full of subtlety and nuance. It may be that you only want people with similar vocabularies and the same appreciation of nuance to enjoy your work. This is admirable. But I will also say there is a pretty large audience of people who enjoy books written in a simple, straightforward style, with stories that make them feel clear emotions. They want to feel your hero’s heartbreak, loss, and worries, and rally around your characters courage, cleverness, and triumphs. I spent far too many years afraid to write an obvious emotion. It took time for me to be comfortable writing that being in love feels swell, that being cheated on by a lover feels lousy, and that losing a friend to death feels like the end of the world. These sentiments didn’t strike me as original or fresh. Some truths will never get worn out. You might be worried that what you’ve written isn’t complicated or complex enough. As long as you’re writing from a place of honesty and experience, readers will respond to it. There’s no idea so simple that there’s no longer a market of people willing to listen to it.  If you doubt this, tune into any radio station and see how many songs in an hour use the world “love.”
Posted by James Maxey at 12:26 PM