Burn Baby Burn is a book that took me a long time to write and a short time to write. A long time, because I started thinking of it as soon as Nobody Gets the Girl saw print back in 2003. I plotted it out in my head, but when Phobos Books folded after the release of Nobody, it didn't make sense to write a sequel to a book that hadn't done well. So, I pushed it to the back of my mind, but I always kept thinking about it because there were stories I could tell about two supervillains that I couldn't really tackle with more traditional protagonists. Years later, ebooks became a thing thanks to Amazon, and I published an ebook edition of Nobody Gets the Girl. It sold really well, and suddenly I wished I'd gone ahead and written that sequel. So I did, banging out the first draft in the span of a week. To this day, it's the book that has changed the least from first draft to final draft. The story had gestated so long in my imagination it came out right the first time.

As for the story I wanted to tell that I couldn't tell with heroes, I wanted to write a love story. But the problem with most love stories is that they are about lovable people. The protagonists are usually witty, charming, good looking, and good-natured. So the underlying theme of most love stories is that love is a wonderful thing... if you're lovable. But what if you're not so lovable? What if you aren't even likable, kind of downright terrible, in fact? Does love have any power to change the lives of such people? Is it possible to find redemption in love no matter your past sins?

This is also the book where I deal most with the emotional turmoil of having a partner die slowly, knowing death is coming, and knowing there's nothing you can do to stop it. Which sounds like a pretty bleak theme, but if I have any words of wisdom at all to say on this subject, they wound up in this book. And despite the dark theme, this is a book that takes place in part on an island populated by talking chimpanzees. It's got a lot of humor and weirdness to sustain the reader through the darker moments. If you haven't read Burn Baby Burn, don't feel like you need to read Nobody Gets the Girl to understand it. The book stands alone despite being a sequel to the first book and a prequel to the third book. Grab your copy here!

And now, without further build up, the new cover by Mike MEZ Phillips! 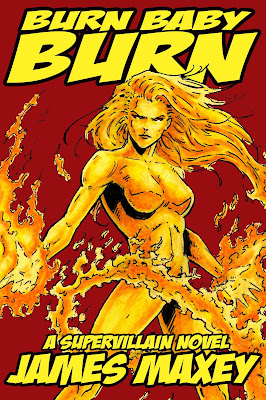