Cinder: Book Four of the Dragon Apocalypse: Let there be a cover!

I'm pleased to finally reveal the cover for Cinder: Book Four of the Dragon Apocalypse. The figure of Cinder was drawn by Giared Terrelli. Cinder is the daughter of Stagger and Infidel, conceived by a living mother and a dead father in Greatshadow's spiritual realm. As such, she has the power to travel freely between the lands of the living and the dead. Perhaps as a result of being conceived in Greatshadow's realm, she possesses skin the color of soot, much darker than I decided to portray her on the cover since I didn't want Giared's line work getting completely wiped out. She's been raised among the Jawa Fruit pygmies, the same tribe that took in Stagger's grandfather, Judicious Merchant, as seen in the first book.

As far as the background, readers of the series may remember that the Church of the Book believes that all of reality is actually nothing but words written in a sacred tome by the Divine Author. Let's just say that one of Cinder's extradimensional journeys takes her to the strangest abstract realm yet.

My goal with these covers has been to pay tribute to the true roots of my love of fantasy, the fantasy comic books of the seventies put out my DC and Marvel. There was Conan, of course, and Mike Grell's Warlord, plus slightly lesser known series like Krull, Claw, and Red Sonja. I was reading Conan comics before I was even aware that they were based on novels. Comic book fantasy was pure sword and sorcery, very action driven, without much emphasis paid to political intrigue. The larger plot lines ran for several issues, but each seventeen page comic book would contain a complete story. A lot of the pacing and action in my books can be credited to these comics, which taught me to expect fast pacing and over the top action. I also confess it instilled in me a love of melodramatic dialogue, and more than a little humor. Fortunately, I did get some humor woven into Cinder, though this is definitely the darkest, most high stakes book of the series, given that half the book literally takes place in Hell. Good times.

Cinder launches May 18! If anyone would like to get on a mailing list to get notified when it's available to order on various platforms, email me at james@jamesmaxey.net. Thanks! 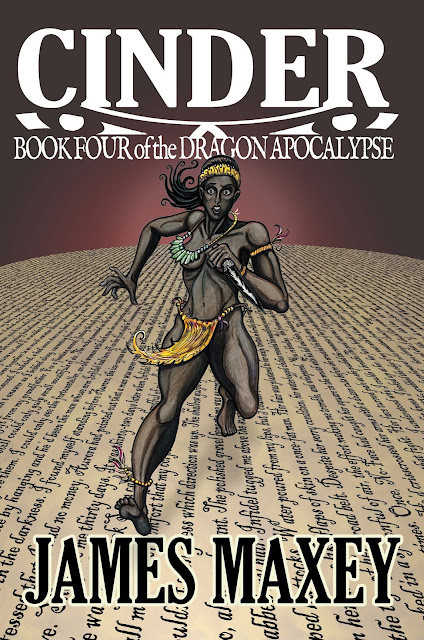 Any plans for a physical copy?

Yes indeed! My goal is to have both out at the same time, though Amazon sometimes delays in linking hardcopy and ebooks together. I'll post links to both if that turns out to be the case.