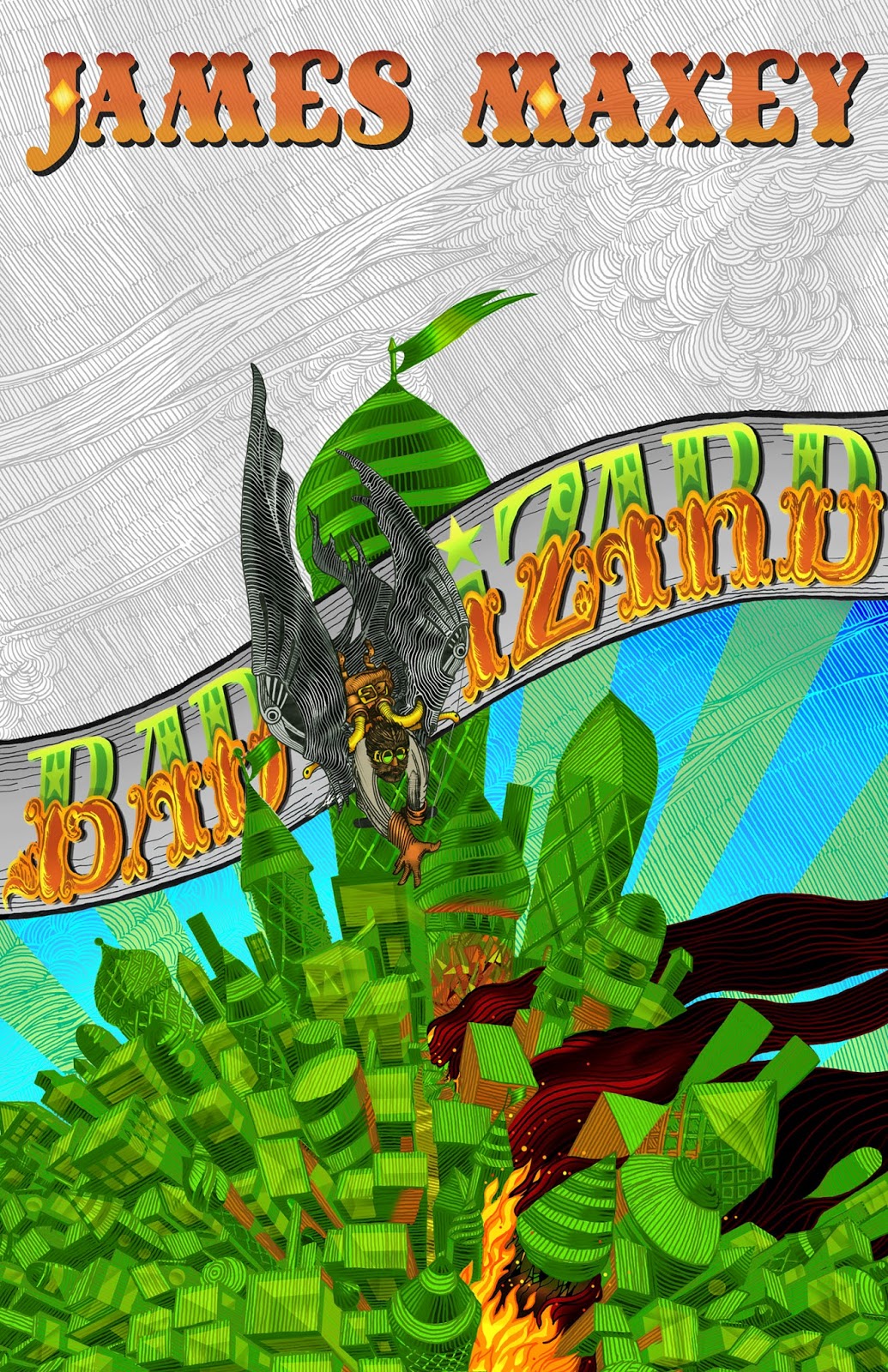 ﻿
Jeremy Cavin's amazing cover revealed in its full glory. You should be able to click on the above image to see a higher resolution version of it. Bad Wizard is on track to be available for sale on October 1. If you're interested in reading the book prior to publication in order to review it, please email me at james(at)jamesmaxey.net. Line edits are still being finalized, but I can provide an advanced review copy in an electronic format of your choice. Advance readers will get rewarded with a Bad Wizard poster!
The story:
In 1894, Oscar Zoroaster Diggs walks into Topeka with every pocket of his suit stuffed full of high quality emeralds. Overnight he's the richest man in Kansas. With his winning smile and gift for gab, he's quickly befriended by the governor and appointed as one the state's US Senators. While in Washington, he befriends Theodore Roosevelt, and when Roosevelt becomes president, Diggs become the Secretary of War. Now, in 1904, he's overseeing the construction of a fleet of zeppelins to be used to spread democracy to the far corners of the earth.
One woman knows Diggs true goals, however. Her name is Dorothy Gale, a reporter for the Kansas Ear. She's hounding Diggs with articles showing him to be a corrupt conman. She has a talent for getting her hands on sensitive documents to expose his shady dealings, but so far Diggs hasn't been harmed by her charges of corruption. In her quest to expose the truth about Diggs, Dorothy is hampered by her inability to tell the full truth. She alone knows the truth of how Diggs acquired his fortune -- she met him ten years ago in Oz, where he ruled as the Wizard. She also knows his true purpose for building the fleet of airships -- he plans to return to Oz to rule once more. But she can't go to her editor and explain that Diggs is planning to invade an invisible sky island ruled by witches. Nor can she explain that she gets her sensitive documents not from connections in Washington, but by using her magic silver slippers to travel cross country in the blink of an eye.
Dorothy's plans to thwart Diggs are complicated when he kidnaps her to take back to Oz as insurance that the Scarecrow will hand over the throne of the Emerald City. When she escapes his clutches in Oz, she must navigate a dangerous magical landscape in order to rescue her the Scarecrow, the Tin Woodman, and the Lion. But even when they are finally united, will they be too late to stop Diggs from conquering the Emerald City with his aerial navy?
Posted by James Maxey at 6:49 AM