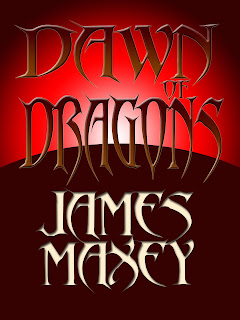 THE DRAGON SLITHERED SILENTLY among the trees branches as the knight on horseback drew closer. A practiced hunter, the beast positioned himself downwind, with the setting sun at his back.
Not spooking the horse was the dragon’s top priority. The knight himself would be no threat, but experience had taught the beast the benefit of slaying the mount along with the rider. Horsemeat as a rule was more savory than the flesh of men. No doubt the diets of men spoiled their taste; most humans spent the better parts of their lives slowly poisoning themselves.

This knight looked to be no exception. Despite the gleaming, polished armor that glimmered ruby beneath the dimming sky, despite the sword and mace and crossbow that all hung within easy reach, it was obvious from his smell that this man posed no danger. He was sweating from the simple effort of wearing the armor and riding the horse. No doubt his sword arm was slow, his aim unsteady. This was just another deluded fool in a growing string of fools who had set out in pursuit of the dragon.

The knight grew ever closer to the dragon’s hiding place. The man’s eyes stayed on the path before him, oblivious to the danger above. As the knight passed below, the dragon was close enough that he could have dangled his tail and touched the rider’s helm.

With feline anticipation, the dragon tensed, his mouth opening slightly to reveal dagger-like teeth. His strike would be lightning-swift; the horse and rider would die before they ever understood their fate. The dragon’s claws sunk deeper into the branch as he shifted his body to pounce.

“Goddammit,” grumbled the knight, pulling the reigns of his horse as he twisted in his saddle to better reach his saddlebag. He continued to curse softly as he rooted around the contents of the bag, only halting his obscenities when he shifted his helmet back and raised the phone to his ear.

The dragon leaned closer, curious at this new development. His keen hearing allowed him to hear the voice on the other end of the line. A female voice. The knight’s mate, perhaps?

“Dammit, Martha,” said O’Brien. “You know not to call me when I’m working. You know I—what? What do you mean you know I’m not working? Jackson told you what? What?”

The woman’s voice on the other line told the knight what Jackson had revealed: O’Brien was spending several million dollars to pay for a vacation at the most exclusive hunt club on the planet. He’d explained his absence to his wife by claiming he was attending a business conference.

O’Brian sighed, and rubbed his temple.

“Fine,” he said. “So I’m hunting. Yes, you’re right, this is a goddamned mid-life crisis. Yes, I lied to you. Yes, I frivolously blew a huge wad of dough. But it’s my money, Martha. I’ve worked my ass off to get where I am and it’s time I started eating the fruit of my labor.”

The woman’s voice grew louder and angrier as the dragon lowered his long snaky neck to listen better. He was now close enough to see his toothy reflection in the knight’s polished helmet.

“Don’t take that tone with me,” snapped O’Brien. “I don’t need to explain myself. Tell Jackson I’d better not see his face when I come back to the office. I—”

Martha asked something the dragon strained to hear. Her mood had shifted. Her voice cracked with sorrow. Didn’t O’Brien trust her anymore?

“This isn’t the time to discuss this,” said O’Brien. “I’m hunting! There are dangerous animals here and it’s getting dark. I’m going to hang up. Don’t call me again. I mean it. Yes. Yes, consider that a threat. The prenuptial agreement is rock solid, Martha. You’ll do as I say and you’ll like it.”

The dragon had enough. Tensed muscles uncoiled as it leapt, spreading its wings at an angle that flipped it into the path of the knight, opening its jaws and emitting a hiss that caused the horse to rear.
O’Brien cursed as he fell from the saddle to the stony path. He curled into a fetal position to avoid the hooves as his horse turned and leapt over him. Martha was shouting from the fallen phone, her voice panicked. With a start, O’Brien unfolded himself and drew the sword from his scabbard, struggling to reach his feet as the dragon looked on with impatience.

“Good sir knight,” said the dragon, with a hissing British accent that was half Monty Python, half actual python. “Sheath your sword and heed my words.”

“Your mate has called because she fears for your safety and you treat her with scorn,” said the dragon. “True knights were chivalrous, but your behavior is loutish in the extreme.”

“Or you’ve hit your head rather hard on the path,” said the dragon. “No, I jest. I am, indeed, speaking your native tongue. The monsters who designed me thought it a nice touch, as dragons in speculative literature are somewhat loquacious. But, sir, don’t allow your amazement over my vocalizations to distract you. Your behavior toward your wife is shameful. As one who dreams of knowing the love and affection of a devoted mate, I ask you to lift up that phone and apologize. Leave this place, and I shall not injure you. My offer of safe passage does not extend to your horse.”

“You assume a martial position,” said the dragon. “I ask you to reconsider. Don’t act rashly. I’ve killed seventeen of your ilk. You haven’t a chance if you continue on this course of action.”

“Hee!” said O’Brien, licking his lips, shifting his grip on the sword. “You breathe fire, too? You making this hunt worth the money, lizard? Huh, lizard?”

“My name,” said the dragon, “is Morningstar.”

O’Brien screamed like he was auditioning for a kung fu movie as he lunged forward, swinging his razor sharp sword like a baseball bat.

Morningstar pushed backwards with a flap of his wings, raising up on his tail for balance as the sword cut the air where he’d stood. His hind claws lashed out, slicing through O’Brien’s steel breastplate like the world’s fastest can-opener.

O’Brien dropped the sword, falling to his knees as Morningstar swayed above him. The wanna-be knight dipped his gauntleted fingers into the jagged gash in his breastplate. He pulled them out to study them in the dying light. They dripped with red. His face grew pale.

Morningstar snaked his head forward, jaws wide open, and sank his teeth into O’Brien’s cheeks. With a snap and a crack, his jaws closed, and Morningstar’s mouth was filled with teeth and a tongue not his own. O’Brien fell to the stony path with a clatter.

Morningstar spit the foul taste of businessman from his mouth and silently moved toward the fallen phone. He lifted it, listening to Martha’s panicked voice. It nearly broke the dragon’s heart. How terrible it must be to lose a mate, even a rude and foolish one.

“Madam,” Morningstar said with all the softness his serpent voice could muster. “I regret to inform you of a tragic event.”

Enjoyed the preview? The book is now available on Kindle and Nook!

FYI, the Nook link for Dawn of Dragons takes you to the Bitterwood complete collection. That's OK. I decided to buy that also. I had Bitterwood, read the rest of them from the library, but now I can reread them. The sample of Dawn of Dragons looks pretty awesome.

By the way, I still think that the Bitterwood trilogy is your best stuff. Give us more in that vein.

Thanks, Heresolong. It's possible I'll return to the world of Bitterwood somewhere down the road. A few years ago, I jotted down some notes on a book about Graxen and Nadala, the two dragons at the heart of Dragonforge, as they find thier way in a new land. Listening to the audio edition of Bitterwood made me think more about returning to the story. At this point, it's just a matter of finding time to write all the books I have in my head.

If you don't mind me asking, what aspects of the Bitterwood series most appeal to you?

The appeal to me of the Bitterwood series was a classic fantasy (sci fi?) with fascinating characters and a story that held my interest.

In contrast, the characters in your other books didn't hold my interest. I found it hard to relate to those characters. Not sure why, just that they all seemed less "_____________" (something). Not sure what goes in the blank, just that I didn't like the characters as much. Maybe it was the "super powers" thing which I vaguely remember from the Dragon Apocalypse (or maybe I'm just misremembering stuff). Made the characters seem less real (like those in the superhero books). Sorry for the rambling, it's been a while since I read all those and I don't have a great memory.