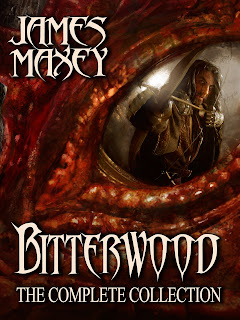 If you've already purchased the Bitterwood trilogy and don't want to shell out for the collection just to read Dawn of Dragons, don't despair. My editor is making a revision to the front matter of a solo edition, but I anticipate it will be live in a day or two.
Posted by James Maxey at 6:11 PM