The Next Big Thing: Witchbreaker 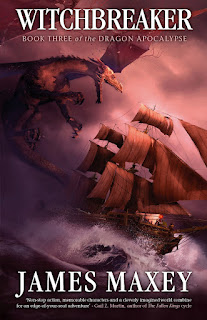 Gail Z. Martin answered some questions about her next book on her blog last week and forwarded those questions on to other authors so they could have a crack at them. Since Witchbreaker hits stores next week, this seems like a good excuse to talk about it.

What’s the title of your next book?


Witchbreaker: Book Three of the Dragon Apocalypse
If you found yourself in a lift with a movie director you admire and had the chance to pitch your book to them, what would you say?

Witchbreaker is the story of Sorrow Stern, a young witch on a quest to find the legendary queen of witches, who forms an uneasy alliance with an amnesiac knight called Slate, who may or may not be Lord Stark Tower, the infamous Witchbreaker.

If this happened to your work, which actors would you choose to play your characters?

I never really think about my books as movies, so I haven’t given this a lot of thought. You would need a time machine to make this happen, but I would say that Sorrow would be well represented by a young Sinead O’Conner. Slate looks a bit like Robert Irvine from the Food Network. I’m sorry I don’t know more current celebrities. I go to maybe three movies a year, and usually two of them are animated.

Who or what inspired you to write this book?

Without naming names, some years ago I was romantically involved with a woman who had experienced a very traumatic event when she was young and saw how, decades later, those events had left her living in a very different world than most people. She was acutely aware of injustices that others were blind to. This had the negative affect of creating a sense of paranoia and isolation and a slow, seething anger that never quite went away. But, it also had the positive aspects of giving her a tremendous amount of empathy for the suffering of others, and a steely stubbornness to stand up for her beliefs and not whittle her values away with compromises that most of us make without a second thought because we don’t want to live our lives in a constant state of confrontation.

Sorrow’s character draws heavily from this mold. Her father was a judge who hung his own mother after she was accused of being a witch. Sorrow rebelled by becoming a witch herself, but her hatred isn’t directed directly at her father, it’s directed at the religious and political institutions that empowered him. So, Sorrow’s life mission is to overthrow that system. She’s one woman against the world, fighting to make it a better place even though everyone she meets keeps insisting that the world isn’t so bad. I’ve got a soft spot in my heart for characters locked into a lifelong battle against forces more powerful than they will ever be.

How long did it take you to write the first draft of the manuscript?

A few months. I started the book around last Christmas and turned in the final draft in July. The last few years have been pretty productive for me. With Greatshadow coming out last January and Witchbreaker coming out in December, I’ll have written quickly enough to see three epic fantasy novels released in a single year. I don’t like to keep my reader’s waiting!

What other books would you compare this story to within your genre?

Terry Pratchett is the closest comparison, though my books are less overtly humorous and a bit more weighted toward action.

What makes this book uniquely yours, a reading experience that no other author could provide?

My Dragon Apocalypse novels are kind of their own little mini-genre, medieval superheroes in epic battles against dragons, with a carefully balanced blend of action, humor, romance, and philosophy. I write about the moral questions that fuel my curiosity, but do everything I can not to be preachy and to make sure that the plot moves forward on every single page. I try to take characters who are pretty difficult to like and lead the reader to a deep understanding of why they are who they are, so that even if you sometimes roll your eyes at their bad choices, you’re still left loving them. I won’t claim that no other author can do these things, since obviously they can. But, the way I mix these elements is fairly distinctive. I think that, even if my name were stripped from my novels, a reader could still recognize me by my style and my approach.

How has this book helped you grow as a writer?

In the past, most of my characters have been loners, since this is kind of the standard template for iconic heroes. Superman, Batman, Spiderman—all orphans who have secrets that keep them from fully connecting with other people. Sorrow certainly fits this mold, but I’ve surrounded her with a supporting cast called the Romers, who are a family of super-powered sailors. They love and support one another, though they have the same squabbles and tensions as any family. Some of the most heartwarming scenes in the book are about the way they relate to one another. This is the first book where I really talk about family in any meaningful way, and I think it gives the book a nice heart. The love and warmth that the Romers show one another is a good contrast for Sorrow’s much more cynical world view.

When will your book be available?
It hits bookstores December 26, so if you happen to receive a Barnes and Noble gift card the day before, keep me in mind. In fact, I’ve been told you won’t even need to wait that long. In theory, the ebook is going to be available on Christmas Day, though I still haven't seen any "preorder" buttons for the ebook yet.

What else about your book might pique the reader’s interest?

You know, it’s kind of tough to believe that I’ve answered these questions barely mentioning dragons, because this book is chock full of them. We see some elemental dragons from previous books: Hush, Greatshadow, Abyss, and Rott, and are introduced to some new ones: Abundant, the Dragon of Animal Life; Tempest, the Dragon of Storms; and Kragg, the Dragon of Stones. Hush is trying to persuade the other dragons to join her on a quest to destroy mankind as revenge for what happened to Glorious in the second novel, and the book builds to a big confrontation between all the primal dragons that decides the fate of the world… at least until the next book.

Since Gail was kind enough to pass these questions on to me, I've invited a couple of other authors to take a crack at them. So, next week, please check out the answers from Alex Granados as he talks about his novel Into the Cave at alexgranadoswrites.blogspot.com. Then, jump on over to John Brown's blog as he talks about his new thriller, Awful Intent.
Posted by James Maxey at 5:57 AM

I've just posted my review of Greatshadow, so I've some catching up to do with Hush first, but what a great saga. Thoroughly entertaining!