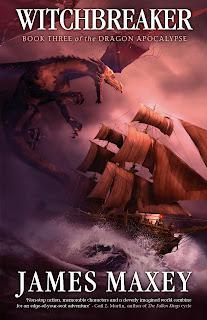 As revealed in my last post, I've assembled a complete draft of Witchbreaker, Book Three of the Dragon Apocalypse. This book is going to be graced with a breathtaking cover from Adam Tredowski, depicting Tempest, the primal dragon of storms, locked in mortal combat with the crew of a clipper ship known as the Circus. The Circus is the new home of the Romers, the family of Wanderer's introduced in Hush. The pace and plot of Hush kept me from sharing as much of the Romers as I would have liked, but I think they really come to life in Witchbreaker.

Of course, the star of Witchbreaker is Sorrow Stern, the young witch introduced in Hush who is on a quest to overthrow the Church of the Book and lauch a new golden age of witchcraft. In personality, she's the opposite of Stagger and Infidel, who mainly wanted to find a little happiness. Sorrow, as befits her name, cares nothing about happiness and is willing to pay any price to reach her goals. She's the most driven character I've introduced in this series, and her attitude doesn't earn her a lot of friends as the book unfolds. But, she's surrounded by a truly eclectic cast that compliments and contrasts nicely with her somewhat harsh world view. There's a lot of humor to balance out the high stakes drama.

Oh, and dragons. Lots and lots of primal dragons. For the first time we get to see the primal dragons interact with one another as they debate the final fate of mankind. There's a reason I call this series the Dragon Apocalypse!

The book hits bookstores in January, 2013. A preview chapter is in the back of Hush, though, alas, that chapter has changed a good deal from the final product. After the book goes through further editorial revision, I'll probably post the final preview chapter here. (The basic outline of the published chapter is fine, but I ditched the whole "Journal of Sorrow Stern" format at the beginning of the chapter since it just proved awkward to include it throughout the book like I'd planned. Ah well. You can't learn from mistakes unless you make them.)
Posted by James Maxey at 6:38 PM