How to Write Magical Words 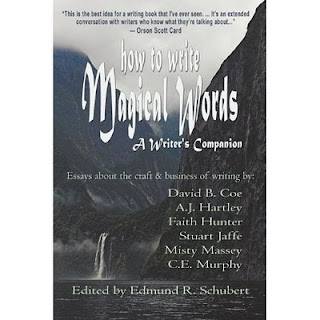 A few months back, I did a guest post at a writing blog called Magical Words. There, a half dozen or so genre writers, including David B. Coe, A.J. Hartley, and Faith Hunter offer advice on all aspects of the writer's art, with a special emphasis on writing fantasy.
They've now released a book collecting many of these essays, How to Write Magical Words: A Writer's Companion. It's edited by Edmund Schubert, who also edits the award-winning Orson Scott Card's Intergalactic Medicine show, so he knows a thing or two about this writing biz.
I was sent a copy for review, but the book is really too broad to review briefly. Pretty much every question a new writer might possibly ask is addressed in this book. The blog origins of the book are evident--each chapter is an essay by one author, which then ends with comments and additional advice from other authors. I was particularly impressed by Ed's essay on the proper use of metaphors. This is something that really divides pros from amateurs in writing, so I asked Ed if I could reprint the chapter and he kindly said yes. So, rather than a review that basically says, "Good book, buy it," here's an actual sample for your reading pleasure:

I was reading an article once in National Geographic about the intelligence of swarms. It talked about how any large group — everything from bugs to birds to a herd of water-buffalo — can take on an intelligence much greater than that of the individual components of the group, and how scientists were applying some of the principals of swarms to solve human problems. Included in that story was an example of a trucking company that had developed a computer model for routing its trucks based on algorithms inspired by the foraging behavior of Argentine ants, a species of ant known for laying trails by depositing pheromones.
Everybody get that? Let me repeat it: A trucking company developed a computer model for routing trucks based on algorithms inspired by the foraging behavior of Argentine ants, a species known for laying trails by depositing pheromones.
Okay, I like to pretend I’m a reasonably intelligent guy, but my first reaction was, “What…?”
But here’s the thing: In the next paragraph, the writer of that article gave me something I could sink my teeth into. He gave me an analogy. He said that what the ants (and therefore the trucking company) were doing was like when someone goes into the forest to collect berries. Over time a path is worn in the ground to the best places to find berries.
Now that I understood.
Algorithms and ant pheromones? Not so much. Berries in the woods? Now you’re talking my language. And that’s kind of ironic, really, because the language we’re talking about is pictures. Word pictures.
Writers are all trying to communicate a message, and to do so as clearly and effectively as possible. So what I want to talk about today is the power of metaphors, similes, and analogies. I’m not going to bore you with dictionary definitions of these terms; what you need to know is that the essence of all three is that they describe one thing by comparing it to something else.
There are a lot of ways to do this, and a lot of reasons to do this. First of all, you might be trying to describe something unusual — Argentine ants and their pheromones, for instance — so you compare it to something people are more familiar with. This helps them understand what you’re saying.
On the other hand, you might be talking about something very basic, like writing, and want to jazz it up. Writing in and of itself isn’t terribly hard; you’ve all been doing it since the first grade. But you want to make it more interesting, to catch people’s attention, so you might describe it using cooking terms. You might say that writing a story is like cooking a meal, and that if all you give people is meat and potatoes, they won’t go hungry, but nobody’s going to rave about your cooking, either.
If you want to present a meal that really satisfies, you’ve got to spice it up a little. You’ve got to throw is some oregano, some thyme, maybe a little parsley on the side. Well, okay, skip the side of parsley. Nobody likes that stuff. Using parsley as a garnish is like using clichés in your writing. Don’t waste people’s time.
Having said all that, I should also mention that you do have to be careful not to get carried away. As with herbs and spices in cooking, you want to make sure you don’t over-do it. A little salt makes everything taste better; too much and it overpowers the meal. Everything in moderation.
Another advantage of using metaphors, similes, and/or analogies is this: they help people remember your keys points. By using one of these comparative devices, you are subliminally telling the reader what your most important points are by placing extra emphasis on them. That helps to reinforce those points in their minds.
By way of (an admittedly silly) example, let’s say you’re writing a magazine article about gardening, and you’re trying to describe the perfect kind of soil to plant rosemary in. And say the perfect soil for planting rosemary is rich but pale and very dry. Well, that’s not terribly evocative. But if you say it needs to be rich, pale, and very dry — kind of like Bill Gates… Hopefully you’ll get a laugh. But more importantly, you’ve reinforced your point by drawing extra attention to it, making it one people are more likely to remember.
The last thing you want to remember is to make sure your metaphors and similes are appropriate to the subject matter you’re trying to describe. I remember a friend telling me about someone who came to his writer’s group with a mystery story, and in this story the author had portrayed a particularly gruesome killing. There was a key scene where the police at the crime scene were trying to figure out ‘who done it,’ when suddenly the author described the fingerprints the detective found like this: “Detective Spade studied the bloody print on the victim’s slashed throat and couldn’t help but notice how much the swirling pattern reminded him of the tiny whirlpool his toilet made when it was flushed.” That doesn’t add anything; in fact, it’s a terrible distraction. It’s counter-productive. You have to make sure your comparative descriptions fit with the tone of the subject matter.
Metaphors. Similes. Analogies. You can call them word pictures if that makes you happy. But I would say that more important than what you call them or the differences between them, is remembering the power they have when used correctly. The power to clarify, the power to enliven, the power to reinforce. The power to make your writing really stand out — as if it were covered with Argentine ant pheromones.


· A.J. Hartley
Great point about distracting or overly numerous analogies/metaphors. I read a piece recently for a short story contest and every sentence was laced with these eye-catching metaphors. Some of them were very good, but used en masse it was like being bludgeoned by the writer’s cleverness: irritating and distracting. You got so caught up in trying to figure out whether the metaphor worked that you were utterly knocked out of the story. Using metaphors is like sewing seeds: they need space to grow… [okay, that was a simile]

· David J. Fortier
What I really enjoy in writing, is when the figurative language (metaphors, similes, analogies and other devices) are character specific. For example, when a character with a nautical background compares things to sailing, boats, stars and other things familiar to them. Not only does it help you remember key points of the story, it also is a good way of reminding the reader of characters’ backgrounds. Done well, characters really come to life.
Posted by James Maxey at 9:53 AM