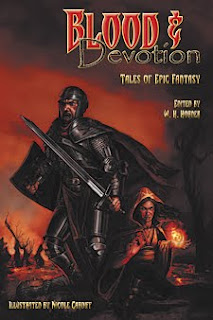 Blood and Devotion is the latest anthology from Fantasist Enterprises, edited by William Horner and Illustrated by Nicole Cardiff. The theme of the anthology is summed up on the FE website: "Brave warriors and devotees to the gods follow the paths their faiths have put before them, and when religious fervor meets skill of arms and magic, kings will fall, armies will collide, and men and women will perish for their beliefs."
The stories within are:
Foreword by David B. Coe
“The Daughters of Desire” by Jay Lake
“Hammer Song” by K. L. Van der Veer
“The Treachery of Stone” by William Jones
“In the Light of Dying Fires” by Gerard Houarner
“The Perils of Twilight” by Peter Andrew Smith
“The Gifts of Avalae” by Ian McHugh
“Eye of the Destroyer” by Aliette de Bodard
“Greatshadow” by James Maxey
“Magic’s Choice” by R. W. Day
The title "Greatshadow" may be familiar to readers of this blog as the name of my current novel project. The short story in this anthology is the inspiration for the novel, containing the same basic plot: The church has launched an expedition of its finest warriors to wipe out Greatshadow, the world's most feared dragon. A band of local mercenaries has been hired to help guide the heroes to the dragon's lair, but the mercenaries plot to kill the heroes once the dragon is slain and keep the treasure for themselves.
I recently acquired some extra copies of the anthology to reward wise-readers of the Greatshadow novel, and still have a couple left over. So, let there be a drawing! I've got two copies to give away. But, you've got to do a little work if you want a copy: I'd like to see jokes about dragons. How many dragons does it take to screw in a light bulb? Why did the dragon cross the road? A wizard, a knight and a dragon walk into a bar.... you get the idea. Either post your jokes in the comment thread or email them to me at nobodynovelwriter@yahoo.com. I'll draw two winners from the entries on April 16. Good luck!
Posted by James Maxey at 6:12 AM

Thanks, Chandon. Do you mind if I post the joke here as well?

go right on ahead!

The humorous poem by Drakonis:

Dragons, like wagons,
Have tongues.
Dragons, like flagons,... See More
Have necks.
But while two hold beer,
The other eats deer!

A dragon, a wizard, a knight,
Walked into a bar late one night,
They wanted a meal,
But found nothing to steal,
So the dragon ate both with one bite.

That's great! I was actually trying to think of a dragon lymerick when I announced the contest and was coming up blank. Well done!

Who settled the American west?
Some claim it was humans; they jest.
It was settled by dragons,
On Conestoga wagons,
With smoked humans in each wagon's food chest.

These are too much fun . . . even if the rhyme scheme isn't perfect.