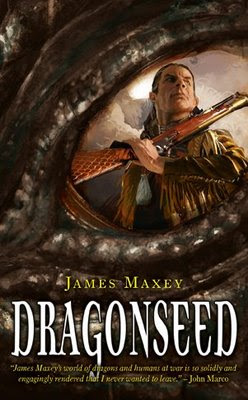 Tomorrow: Galleys!
Posted by James Maxey at 8:35 AM

I think what I like most about the covers, besides their glossy eye-catching quality, is that you never do really get a good, crystal clear look at the beasties inhabiting this paticular realm. While they are described well enough in text, it leaves just enough to the imagination to make it enticing. This same device can be used in different ways (It's what made the Aliens so scary after all) but here I think it really does spur curiosity.

While the first book could have had a dueling Sun Dragon and Bitterwood in full view, I think it would be less enticing.

I also find the relection in the eye gives the Dragons a bit of an introspective quality right off the bat, setting up expectations right away.

I've been really lucky with the cover designs. I agree that it's better that my dragons remain a little mysterious on the covers. Since my dragons are a little different from traditional fantasy dragons, it's nice not to have my covers contradicting my descriptions of the various dragon races. Sometimes less is more.

Sorry this is late. I haven't checked in for awhile. I'm sooo pumped to see this cover and hear that very soon the book will hopefully drop. I've been waiting very impatiently!
Just an opinion of the reflection of Burke in the eye. It would almost be as if he is standing OVER the dragon. At least that's the angle that it looks like to me. And with gun in hand, it could also be assumed that he has just killed said dragon and now is looking around towards the sky to see if any other dangers are in site.
Now, if that goes along with the book, well I suppose, we will all find out soon enough!
Either way, great looking cover, even if it's not the final. I wish I had such wondeful talent.
Later!