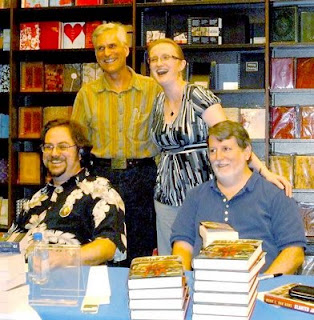 Jo Drake was kind enough to snap this photo of my shared signing this week with Mark van Name and Lisa Shearin. I'm the guy with the glasses; standing in the back with Lisa is best-selling author David Drake, who wasn't part of the signing but was there showing some support. David sells more books in the time it takes him to tie his shoes than I have in my life. One of the moments in my life when I realized just how badly I wanted to be a writer came about seven years ago when I went to his house as a guest of a guest to a barbeque he was holding. I was unpublished at the time; I had written Nobody Gets the Girl but hadn't yet shown it to the folks at Phobos. David has written scores of books and several of the walls of his house were decorated with framed covers of his novels. Seeing this made me want my own wall of book covers; I can honestly say I coveted those walls far more than I've ever coveted my neighbor's ass. But some time it's hard to separate envy from goal setting. I think until I was confronted with the wall of covers, I was focused on the idea of writing a single book and considering that a major accomplishment. I wanted to be a writer, but I didn't know what that really meant. Afterwards, I began to think more of writing in the context of producing not only a series of books, but an entire body of work. Because you don't get to fill your walls just by dabbling, turning out a book every few years or so. If you want that book wall, you've got to plant your butt in your chair and write. I don't think I even met David Drake at that cookout. But, I walked away with a lesson in being a writer that was just as powerful as anything I took away from the Odyssey Fantasy Writer's Workshop.

Speaking of writing lessons, Lisa runs a terrific blog that she updates faithfully and discusses many of the aspects of the writing life. The same is true of Mark van Name. I highly recommend checking them out.

I recently had it pointed out that I don't have a link to my own personal blog here! I have a second blog, jawbone of an ass, where I rant about politics and religion and other topics that readers of my dragon books may or may not be interested in. I'm going to be doing some redesign of this site soon. Christian Dunn at Solaris has already got back to me with edits on Dragonseed, so getting it edited is my next goal. After that, I've got to write some sample chapters and an outline for my next project so that my agent can have an actual product to try to sell instead of mere rumors of said project. Then, blog updates. I promise!
Posted by James Maxey at 2:46 PM